As Kenyans go to the polls on Tuesday, online posts claim that nationals living in Australia have already finished voting, with some putting presidential candidate William Ruto in the lead while others purport his rival Raila Odinga is leading. But the claim, which has circulated on Twitter and Facebook, is false: according to Kenya’s electoral body, Australia is not among the diaspora countries where Kenyans participate in the vote.

"Diaspora Update: Voting has ended at Kenya High Commission in Canberra, Australia," reads a Facebook post. It also claims that turnout was 100 per cent and Ruto was leading with 319 votes. Another post claimed that Odinga was leading with 198 votes. 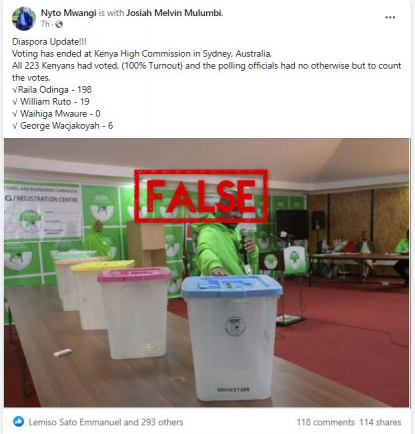 A reverse image search shows that the picture illustrating the first Facebook post was captured on August 7, 2022, during a voting simulation exercise in Kenya's capital, Nairobi. But AFP Fact Check found the claim to be false.

Data from Kenya’s electoral body, the Independent Electoral Boundaries Commission (IEBC), shows Australia is not among the 12 countries where diaspora have the right to vote.

In Africa, Kenyans living in Uganda, Tanzania, Rwanda, Burundi, South Africa and South Sudan are able to participate in elections, while countries on other continents include the United States, the United Kingdom, the United Arab Emirates, Qatar, Germany and Canada. 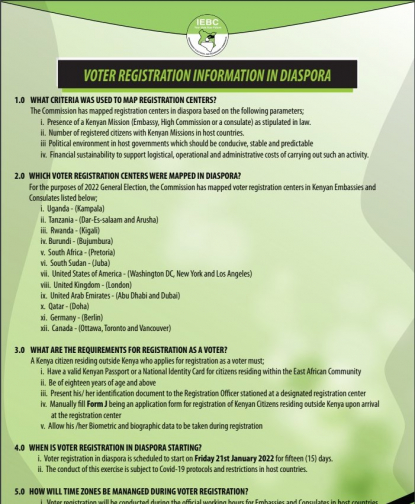 “We are not in Australia, we are only in 12 diaspora countries,” IEBC’s head of communication Purity Njeru confirmed to AFP Fact Check.

The Australian High Commission to Kenya was yet to respond at the time of press.