South Africa is registered by the US SEC as a foreign government, not as a company

Numerous social media posts over the years have claimed that South Africa has been listed by the US Securities and Exchange Commission (SEC) as a private corporation. This claim, which has resurfaced in the last few months, is false; the country is registered as a foreign government that raises funds from US investors, not as a company. It is one of many countries listed.

“Why is South Africa registered as a private corporation? Nelson Mandela signed off the land to the whites in 1998, basically the REPUBLIC OF SOUTH AFRICA is registered as a corporation with the Securities Exchange Commission in the USA,” read part of one of the Facebook posts.

The photo in the posts, all with the same text, is of the cover of a book published in 1988 titled "South Africa Inc. - The Oppenheimer Empire, the Secrets Behind One of the Most Influential Organisations in the World".

The lengthy posts claim that the ruling African National Congress (ANC) sold out the country to corporations and that all the big opposition parties are aware of this.

“Their job is to control us, manage us and keep us asleep, weak and occupied at all cost,” read the posts. 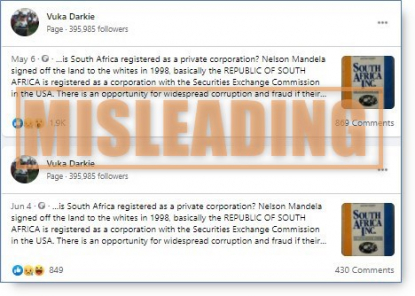 A screenshot of the misleading posts, taken on July 4, 2022

These were previously debunked by the digital verification website Africa Check, which found that none of the investment products that referred to South Africa on the NYSE list it as a private company. For example, “South African Index Tracker Funds” refers to an index that tracks the performance of South African equities.

South Africa makes filings with the SEC because it issues securities in the US.

South Africa’s National Treasury confirmed this to AFP Fact Check, clarifying that “the country is registered as a foreign government, not a corporation as per the SIC 8888 registration”.

Many other countries can be found under the SIC 8888 registration, including Japan, Italy, and Brazil.

A screenshot of the SEC's site showing other listed countries, taken on July 29, 2022

According to the department, foreign governments that intend to raise funds from US investors are required to register with the SEC.

The National Treasury said these rumours had been addressed extensively by various officials since 2012.

The ANC is meeting for its sixth policy conference starting on July 29, 2022. These discussions will set the stage for the next leadership race.