After climate activist Greta Thunberg called for urgent action to save the planet in a surprise appearance at Britain's Glastonbury Festival in June, an image of a rubbish filled ground circulated worldwide in online posts that claim it was filmed following Thunberg's speech. The image was shared in a misleading context; it was taken during the Glastonbury Festival in 2015.

"Glastonbury festival after Greta asked them to save the Planet," states the caption to the image shared on Facebook on June 31.

The 19-year old Thunberg's speech in Glastonbury on June 25 was warmly received by the crowd of festival attendees, the BBC reported. 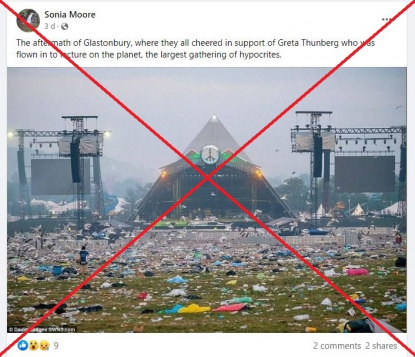 Waste is one of the biggest problems facing music festivals across the world. While Glastonbury has introduced a host of measures to reduce trash -- including banning the sale of single-use plastic bottles -- media outlets reported up to 2,000 tonnes of rubbish left at the site in 2022.

The identical image was also shared alongside a similar claim in Facebook and Twitter posts in English, Spanish, Portuguese, French, German, Bulgarian and Thai.

However, a reverse image search on Yandex found the photo is old.

It was featured in a report by the British newspaper Daily Mail on June 29, 2015 about a clean-up after the Glastonbury Festival that year.

The image is credited to photographer David Hedges of the UK-based SWNS news agency.

Responding to the misleading posts, Hedges told AFP: "The photo in question was taken by me back in 2015. I was not at Glastonbury this year and no longer work for SWNS."

Below is a screenshot comparison of the image in the misleading posts (left) and the photo published by Daily Mail (right):