Skip to main content
Autorickshaws queue up for petrol at a fuel station in Colombo on June 20, 2022. ( AFP / ISHARA S. KODIKARA)

As bankrupt Sri Lanka struggled to fund its fuel needs, an image of a Japanese car that purportedly runs on water circulated widely on social media. However, the posts reference a concept announced in 2008 by the Japanese company Genepax that was not brought to market. Multiple engineering experts told AFP that several companies are working on cars fuelled by hydrogen, which can be obtained from water, but no such technology is currently available that allows cars to run on water alone.

"A car that runs on water," read the Sinhala-language caption of this post published on June 8, 2022.

It shared a purported screenshot of an article with the headline "A motor vehicle that runs on water / 80 kmph with one litre of water".

The Sinhala-language text in the image reads in part: "Even if Sri Lankans also, on multiple occasions, produced motor vehicles that can run on water, this extraordinary automobile has been produced by Japan's Genepax company."

Sri Lanka is facing a grave fuel crisis due to a shortage of forex reserves.

As of July 3, public transport had ground to a halt and most pumping stations had been without fuel for days, AFP reported.

The post also shared a link to an article published by Sri Lankan website GossipLanka, which published similar -- but not identical -- claims to those in the image.

The article claims that a car by Japanese company Genepax transforms water -- from "rainwater, well water, seawater, river water, or even tea" -- into hydrogen, and that one litre will power the car for about 80 km (50 miles). 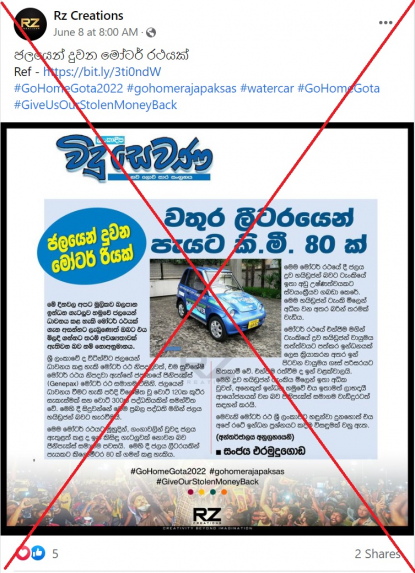 The screenshot was shared over 17,000 times on Facebook including here, here and here.

One commenter wrote: "This would be a perfect solution for Sri Lanka. Why can't the authorities look into this? We are surrounded by a vast ocean and it can be used to our advantage!"

"What an amazing creation! I remember there was a Sri Lankan who created a similar technology. Why don't we make use of local talent?" another asked.

Concept not brought to market

Genepax announced the concept of a car that runs solely on water in 2008, according to reports from Reuters here and here.

However, the company published a statement on February 10, 2009 saying it had not yet been able to overcome "many obstacles" to bring their system to market.

Multiple keyword searches on Google found no further reports that it had successfully rolled out the technology.

As of July 4, the Genepax website is no longer accessible.

Thusitha Sugathapala, a senior lecturer at the University of Moratuwa's faculty of engineering, told AFP: "[Genepax] did not manage to move the technology beyond the announcement stage."

Sugathapala said that several Sri Lankan innovators had also claimed to have made cars that run on water, but they are "nothing more than scams".

Responding to the misleading claims, an associate professor at the University of Sydney's engineering faculty, Dries Verstraete, also told AFP that fuelling a car with water is not realistic.

"In short, yes you can claim that cars can run on water, but in reality they run on hydrogen and it takes energy to produce that hydrogen," Verstraete said.

He added that although there are no such "water-powered" cars, several companies had already brought hydrogen-fuelled cars to market.

MIT mechanical engineering professor Wai Cheng told AFP on June 17 that a car cannot be powered by water without using a conventional or renewable energy source.

"You could use electricity to break down water to hydrogen, which may be used as the fuel. But using electricity directly is much more efficient."