This video shows commemoration ceremony for Pakistan cleric in 2021

A video has been viewed tens of thousands of times in Facebook posts that claim it shows people from multiple Muslim-majority countries protesting against controversial remarks about the Prophet Mohammed made by an Indian ruling party official in 2022. However, the claim is false; it in fact shows a religious congregation commemorating the death of a Muslim cleric in Pakistan in January 2021.

The video appears to show crowds gathered in the street, chanting in Arabic: "Oh Prophet, we are with you."

"In honour of Prophet Muhammad, today people from Saudi, Iran, Qatar, Kuwait, Libya, Oman, Bahrain and Afghanistan came together and shouted Muhammad is the Prophet of Allah, this is the glory of my Prophet, each child is sacrificed to retain the honour of the Prophet," the post reads.

The video circulated as Muslims staged massive protests across Asia in June 2022 in response to remarks made by controversial politician Nupur Sharma during a televised debate about the Prophet's relationship with his youngest wife.

Sharma -- who was a frequent presence on Indian television, where she acted as a mouthpiece for the ruling Hindu nationalist Bharatiya Janata Party (BJP) and a vociferous supporter for Prime Minister Narendra Modi -- was suspended by the party for the remarks.

The clip was also shared with a similar claim on Facebook here and here.

A reverse image search led to a similar clip posted here on YouTube on January 4, 2021.

In life, Rizvi acted as a lightning rod for Pakistan's religious right, and was adept at stirring sectarian resentments and mobilising thousands of fanatical anti-blasphemy supporters at a moment's notice.

A chehlum -- commemoration ceremony held on the fortieth day of a person's death -- for Rizvi took place on January 3, 2021 in the eastern Pakistani city of Lahore, according to a statement from the TLP.

Local media outlets reported about his memorial in January 2021 here and here.

Below is a screenshot comparison of the video in the misleading post (left) and the YouTube video of Rizvi's procession from 2021 (right):

A plan for the procession circulated by the TLP in January 2021 showed it took place at Multan road.

The satellite image of the area shows elevated train tracks corresponds to the one seen in the video of Rizvi's procession: 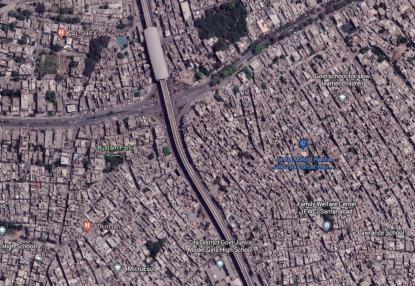 Several photos and a video taken along Multan Road and shared on Google maps also show the elevated rail overpass.

AFP has debunked other misleading claims related to the prophet row here, here and here.