A video clip of US author Naomi Wolf claiming that "there is a baby die-off" in infants born to Covid-19 vaccinated mothers has been viewed hundreds of times on Facebook. But the claim is false. Doctors' statements contradict Wolf's claims, and multiple studies show that vaccination against Covid-19 during pregnancy is safe.

The video featuring US author Naomi Wolf in an episode of War Room Pandemic, a podcast hosted by Steve Bannon -- a former White House adviser under ex-president Donald Trump -- was shared on Facebook here on June 1, 2022.

The one-minute, 26-second clip has been viewed more than 190 times.

Part of the post's Malaysian-language caption repeats Wolf's claims: "- Breastfeeding babies fell sick because of their vaccinated mothers and at least one had died.

"- Of the 270 pregnant women in the Pfizer test, 236 of the participant records were lost, but of the 34 women who remained, 28 of their babies died.

"- In Scotland, twice the number of babies died. In Ontario, Canada, 86 babies died (an average of five or six a year), and deaths among vaccinated mothers increased by 34 percent in Israel." 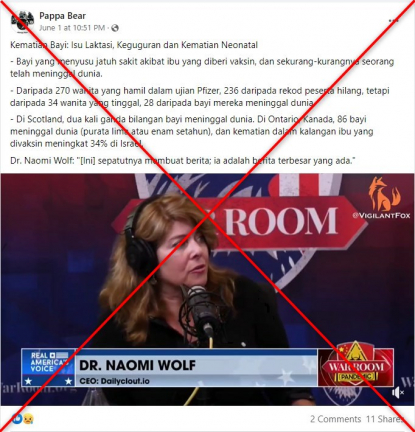 Wolf was banned from Twitter in 2021 for tweeting misinformation on Covid-19 vaccines. Bannon has also been banned from the platform.

The video was also shared alongside similar claims on Facebook here and here.

It also circulated with a similar claim in English here and here, where it has garnered more than 250 views.

The claim about "86 stillbirths" previously circulated in late 2021, with the figure purportedly coming from Waterloo, in the Canadian province of Ontario.

Officials from two major hospitals in Waterloo region said the claim about "the rise of stillbirths" was false, as reported by local news outlet CityNews Kitchener on November 27, 2021.

According to the report, Dr Peter Potts, Joint Chief of Staff at Grand River Hospital and St. Mary's General Hospital, said 12 stillbirths had occurred that year.

That number is far lower than 86 stillbirths -- the figure Wolf mentions in the clip and her post on the newsletter site Substack on May 30, 2022.

Grand River Hospital, the region's largest hospital, tweeted a statement on November 27, 2021: "Occurrences of stillbirth in Waterloo Region are tragic, but remain steady at between 0.2 and 0.4 per cent, lower than the national average."

THREAD
We are aware that misinformation has been circulating on social media reporting an increase in stillbirths in the Waterloo region in the last year. Spreading misinformation is dangerous and unfortunate, and creates unnecessary anxiety and fear among expectant families.1/2 pic.twitter.com/GxIUVALOvI

However, Dr Sarah Stock, who co-led a national Covid-19 pregnancy study, told BBC that the vaccine was not a factor.

And an Israel study, published in February 2022, found that receiving Pfizer/BioNTech's Covid-19 vaccine during pregnancy "was not associated with detrimental outcomes to the offspring".

“As we now know from the scale of vaccine roll-out, thousands of pregnant women have been vaccinated and no risk has been identified,” he said via email.

Jones also said breastfeeding is encouraged as maternal antibodies are a source of protection for newborns.

“If a mother has been vaccinated, the protective antibodies she has generated will pass to the child in breast milk. The same will be true if the mother had Covid prior to becoming pregnant."

He cited a study published in June 2022 that showed no association between maternal vaccination and serious acute adverse events in the 42 days after the jab.

He also told AFP that breastfeeding is a way for vaccinated women to give their babies immunity, citing a US study that showed that vaccination in pregnant women positively affects their babies

Kathryn Gray, attending physician of maternal-fetal medicine at Brigham and Women's Hospital in Boston, previously told AFP that she "definitely" continues to recommend the Covid-19 vaccine to her pregnant patients.

She pointed to a 2022 meta-analysis of 23 studies that concluded: "Covid-19 mRNA vaccination in pregnancy appears to be safe and is associated with a reduction in stillbirth."

Pfizer told AFP in an email on June 17, 2022, that they had not completed their study of the impact of their Covid-19 vaccines on pregnant women.

Once their vaccines were globally recommended for use by pregnant women, the "continuation of this placebo controlled study could no longer be justified", the company said.

Contrary to the claims, multiple studies, such as here, here and here, found that unvaccinated pregnant mothers face a higher risk of stillbirths due to Covid-19 infections.

AFP has debunked other inaccurate claims about the Covid-19 vaccine's impact on pregnancy here and here.