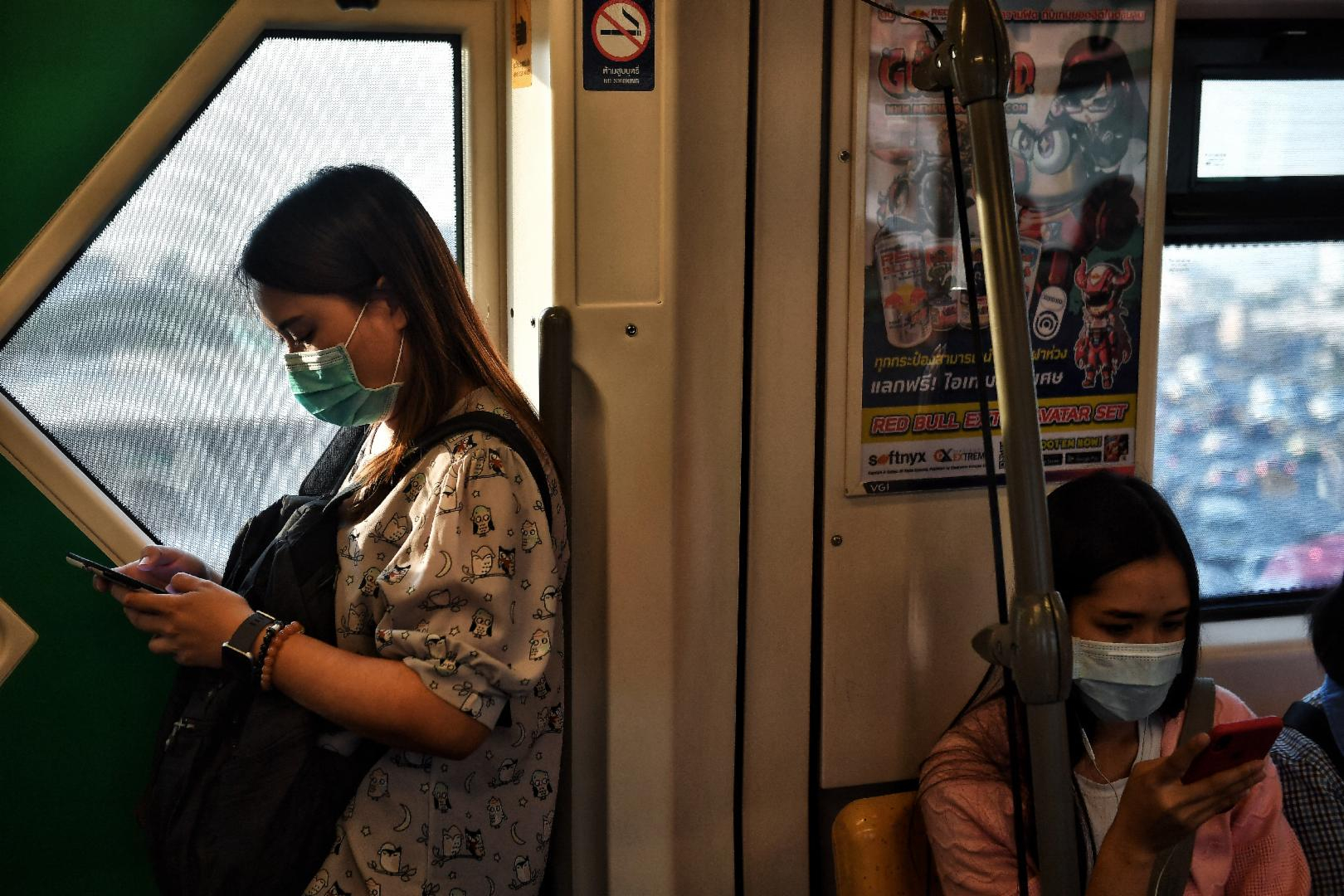 Commuters, wearing facemasks amid concerns over the spread of the COVID-19 novel coronavirus, take the BTS Skytrain in Bangkok on March 4, 2020. ( AFP / LILLIAN SUWANRUMPHA)

Multiple posts shared on Facebook in May 2022 claim Thailand has recorded nine cases of monkeypox. The posts further indicate that mosquitoes are the origin of the disease. But the posts are false; Thailand has recorded no monkeypox infections as of June 6, 2022, the head of Thailand's Bureau of Epidemiology told AFP, while the virus is transmitted through close contact with an infected person.

The post's Thai-language caption translates to English in part as: "Thailand reported nine cases of monkeypox. They work in the island's national park. The carrier of the disease is the mosquito that bit the monkey, and then later bit humans. It is so scary. Channel 7 reported." 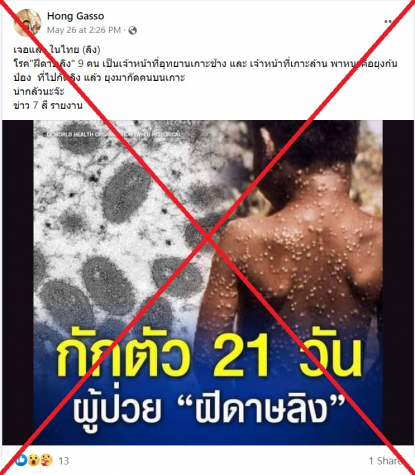 Channel 7 is a TV network in Thailand.

The post includes an image that appears to be an infographic from a news report. It carries a picture of a child with bumpy skin and text that reads: "21 days of quarantine for monkeypox patients."

A similar claim has been shared here and here on Facebook, alongside similar graphics.

The image circulated as cases of monkeypox were detected around the world, including in the United Kingdom, Spain and Portugal.

The Head of the Bureau of Epidemiology Chakkarat Pittayawonganon told AFP: "The claim is not true."

"As of June 6, there are no monkeypox patients in Thailand," he said.

The agency also published this statement on Facebook on June 6, 2022, saying that the kingdom had recorded no monkeypox infections as of June 5.

Mu Koh Chang National Park, which was mentioned in the misleading post, also refuted the claim, calling it "false" on May 27, 2022.

In a Facebook post, it said: "According to a post shared online, there were nine cases of 'monkeypox' patients in the Koh Chang National Park area. We are pleased to inform the public that such information is false. In fact, one of our staff has been diagnosed with Nousai malaria."

Nousai malaria transmits from monkeys to humans via the Anopheles mosquito, according to the country's vector-borne diseases prevention and control programme, which operates under the Ministry of Public Health of Thailand.

The monkeypox virus is transmitted from one person to another by close contact with lesions, body fluids, respiratory droplets or contaminated materials such as bedding.

The incubation period of monkeypox can be up to 21 days, according to the World Health Organization and the Infectious Disease Association of Thailand.

Pokrath Hansasuta, an assistant professor of virology at Thailand’s Chulalongkorn University, told AFP: "If you have an unusual rash and fever, please isolate as soon as possible and go to the doctor."

He added: "If you have been diagnosed with monkeypox, let people you have interacted with know as soon as possible."

Reverse image searches found the image shared in the misleading post appeared in this report by Thailand's Channel 7 on May 23, 2022.

The article talks about Belgium's quarantine measure for monkeypox patients.

In the original image, the logo of the TV network Channel 7 can be seen on the bottom-right corner. 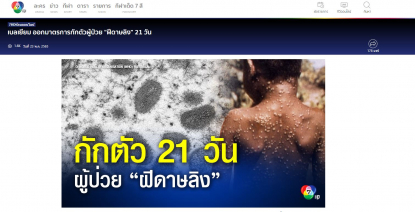 Screenshot of the article published by Channel 7, captured on June 7, 2022

AFP ran a subsequent reverse image and keyword search and found the two images included in the Channel 7 graphic were shared in articles about monkeypox from the Reuters news agency and the US Centers for Disease and Control.

As of June 6, AFP found no credible reports or statements about monkeypox cases in Thailand.