Multiple Hindi-language posts circulating on Facebook and Twitter in May 2022 claim that the Indian state of Telangana rewarded Indian boxer Nikhat Zareen with the equivalent of US$64,381 after she won gold at the women's world boxing championships. This is misleading. In fact, the state awarded Zareen with the equivalent of US$257,525 after her victory in 2022. The posts shared an old photo of Zareen being handed a cheque by Telangana's chief minister in 2014 after she won the World Youth Boxing Championship title in 2011.

The misleading claim was shared here on Twitter on May 26, 2022.

The post's Hindi-language caption translates to English as: "Telangana’s chief minister K Chandrashekar Rao handed over a reward worth 5,000,000 Indian rupees (US$64,381) to Nikhat Zareen after she won gold in boxing. I am proud of you sir."

Indian boxer Nikhat Zareen bagged the title of world champion in the 52kg category at the women's World Boxing Championship on May 20, 2022.

The image shows her posing with a large cheque alongside Telangana's chief minister K Chandrashekar Rao. 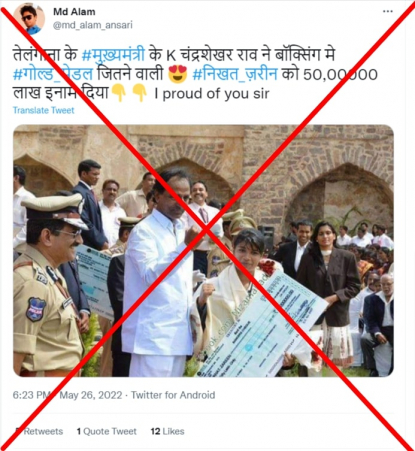 A screenshot of the misleading post captured on June 5, 2022

The reward was reported by The Indian Express, an English-language newspaper based in the city of Noida.

On June 2, Zareen posted the photos of her receiving a cheque for 20 million rupees from the state on her official Facebook page.

She wrote: "I am truly grateful for the reward and appreciate this kind gesture from our Hon'ble Telangana Chief minister KCR  sir & Telangana Govt. Thank you sir for your immense support and motivation." 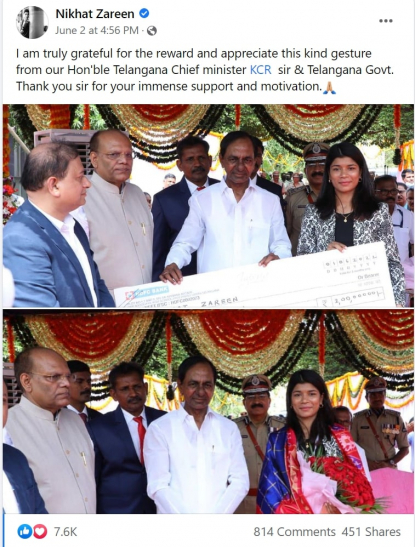 A screenshot of the photos posted by Nikhat Zareen captured on June 5, 2022

The misleading posts shared an old photo of Zareen.

The image was originally posted here on August 15, 2014 on a Facebook page for Zareen.

A screenshot of the original image posted on Nikhat Zareen's page captured on June 5, 2022

Below is a screenshot comparison of the image in the misleading posts (left) and the image posted on Facebook (right) on August 14, 2014:

Comparison of the viral image (L) with the image posted on Facebook on August 15, 2014 (R)

The cheque handover was reported in an article published by the Indian English daily The Deccan Chronicle on August 16, 2014.

According to the report, the 25-year-old boxer from Telangana was awarded five million rupees by the state after she won gold in the World Youth Boxing Championship.