A parody tweet from an account impersonating the World Health Organization (WHO) shared thousands of times claims that world leaders enjoyed a luxury lunch at the World Economic Forum's annual meeting in Davos, Switzerland. A screenshot of the purported tweet shared widely on Facebook appeared to mislead some users. But the fabricated tweet used a stock photo of a dining table and as of May 31, 2022 it has not been published on the WHO's verified Twitter account.

The caption reads: "The world leaders are about to break for a lunch of fresh Atlantic crab and Spanish pork, followed by a duck and the worlds (sic) best cod from a sustainable farm in Norway.

"When we resume we will be discussing freedom of speech and how it could be reformed. #Davos2022."

The hashtag refers to the World Economic Forum's annual meeting, which was held from May 22 to 26.

The post's caption reads: "When you can’t afford meat or groceries just remember what our Overloads are eating and why we do what we do." 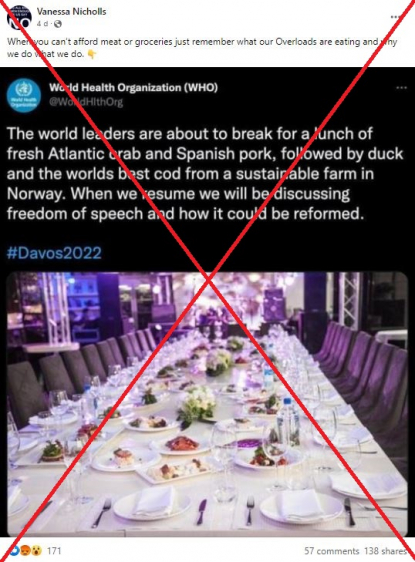 A screenshot of the satirical post captured on May 30, 2022

US-based YouTuber Charlie Kirk shared the parody tweet on Telegram alongside the caption: "The same people who tell us to work bugs into our diet and replace meat with lentils & 'plant-based' alternatives dine like kings in Davos. It's not hypocrisy, it's hierarchy". 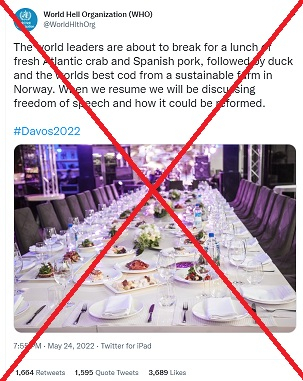 The account carries the handle @worldHellOrg and the name "World Hell Organization (WHO)". It lists itself as a parody account in its bio description.

A Google reverse image search of the photo in the satirical tweet found this stock photo on Shutterstock. 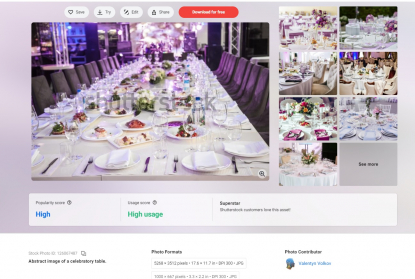 A screenshot of the Shutterstock photo. ( AFP / )

There is no mention of Davos in the photo's description, which reads "Abstract image of a celebratory table".

Further searches of the parody WHO account on the Internet Archive found it previously used the handle @WorldHlthOrg and the name "World Health Organization (WHO)".

The archive shows it later changed its handle and name to "World Hell Organization (WHO)".

A search of the parody tweet's text on the WHO's official Twitter account -- which has the handle @WHO -- did not find any matching results. 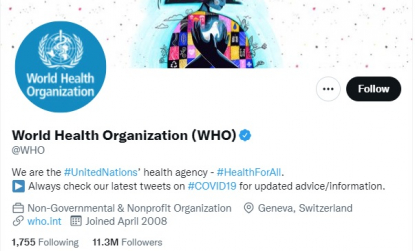 AFP has previously fact-checked misleading posts about the WHO here and here.