Picture does not show decorated officer among Russian prisoners

Social media users shared a photo claiming to show that a senior US military commander was among captives when Ukrainian soldiers defending the Azovstal steelworks in Mariupol surrendered to Russian troops in May. But the claim is false; retired Admiral Eric Olson confirmed to AFP that he was not in Ukraine, and the photo appeared in Russian media a month before the surrender.

"Ukraine News reports U.S. Admiral Eric Olson was captured in Azovostal fighting for Ukraine with the Azov battalion. This shows U.S. troops on the ground in country. Sounds like we are at war," claims a May 16, 2022 tweet.

Similar claims were made in English on Facebook, Instagram and in online articles and shared in several languages including German, Czech and Slovak. A May 17, 2022 post in Czech, shared more than 1,400 times, said: "The first 300 soldiers surrendered in Azovstal... U.S. Admiral Eric Olson (a highly decorated special operations chief), born in Tacoma, USA, was taken into custody in Azovstal by the Russian military."

The post has a red circle around a man in army fatigues with other prisoners being led by a Russian soldier carrying a rifle and bearing the letter "Z" on his vest - the distinguishing sign of Russian troops. The captured man's face is partly obscured by the visor of his army cap.

Some social media posts claimed the capture showed a far deeper US involvement in the Ukraine war than has been disclosed.

But AFP reached Olson, a highly decorated serviceman who retired in 2011, via the social networking site LinkedIn. He said the reports were false.

Bemused by the false posts, he nevertheless confirmed in a May 24 message that he was not captured by Russian forces.

"I thought this had already been thoroughly debunked, but now, by receiving this message, you know for sure that either I was not arrested by the Russians in Ukraine or the cell phone reception in my Russian jail cell is very good," he wrote. "I gladly confirm that the former is true."

He added: "Please accept this message as sufficient evidence that I am not in Russian custody."

Olson served as Commander of the US Special Operations Command from July 2007 to August 2011 and was a member of the elite Navy SEALs. As a civilian, he has held academic appointments and served on boards of several US companies.

The social media posts also used images unrelated to the siege at Mariupol, located in southeast Ukraine, which has seen some of the fiercest fighting since Russia invaded Ukraineon February 24, 2022.

On May 19, Russia said a total of 1,730 Ukrainian soldiers had surrendered at the Azovstal steel plant.

To find the origin of the photo claiming to show Olson among the surrendering soldiers in Mariupol, AFP conducted a reverse image search.

AFP found it was published by the Russian government-controlled agency Sputnik on April 14, more than a month before the Mariupol surrender.

Sputnik's description says: "Ukrainian prisoners of war attend an event in memory of those killed in Luhansk People's Republic as a result of shelling in 2014, in Luhansk, LPR." 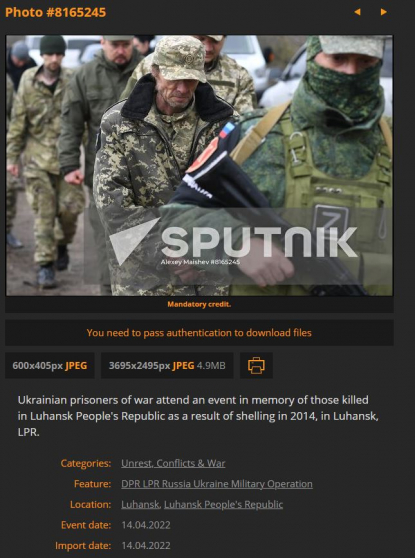 The Luhansk region is some 200 miles (300 kilometers) from Mariupol.

The photo was also used by Russian news agency RIA Novosti in a April 14 article in Russian. The description of the photo translates to say: "Ukrainian prisoners of war from the National Guard were also brought to the event" in the Russian-supported breakaway region in Ukraine. 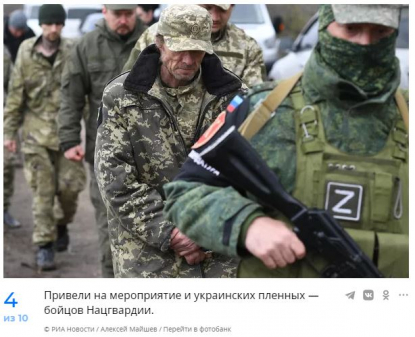 Both Sputnik and RIA list Alexei Maishev as the photographer. Neither agency mentions in the caption Olson or any other foreign fighter.

AFP reached out for additional comment to the Department of Defense, but no response was forthcoming.

AFP has published more than 800 stories in multiple languages that detail false and misleading claims related to the war in Ukraine. The complete list of stories in English is available here.