Multiple social media posts in China have shared a video alongside a claim it shows the Polish president declaring military mobilisation in support of Ukraine. Although Poland sent weapons aid to Ukraine after Russia's invasion, misleading Chinese-language subtitles have been added to the clip to suggest it was sending troops to war. The Polish defence ministry dismissed the claim. As of May 26, AFP found no official reports that Poland was sending troops to Ukraine.

"The president of Poland has declared military mobilisation. Poland will enter Ukraine and join the Ukrainian military resistance!" reads the simplified-Chinese language claim posted on a Chinese microblogging website Weibo on May 8, 2022.

The claim was shared alongside a 32-second clip that shows the Polish President Andrzej Duda giving a speech.

A section of the video's simplified-Chinese subtitles read: "The Polish armed forces are fully prepared to enter western Ukraine, and Poland can always organise Polish volunteers to join the resistance. This will enable us to repel any danger or potential threat." The claim circulated after Poland and Ukraine signed an agreement on May 5 to strengthen defence cooperation.

Poland has played an outsized role since Russia invaded Ukraine, welcoming millions of refugees -- more than any other country -- while serving as a vital staging post and transit point for Western arms and assistance headed to Ukraine.

It has also provided 1.5 billion euros ($1.6 billion) worth of weapons to its neighbour, the Polish state-run broadcaster Polskie Radio reported.

The video has been shared alongside similar claims on Weibo and the Chinese version of TikTok, Douyin.

However, the claim is misleading; AFP found the section of subtitles which state "Poland's armed forces are ready to enter Ukraine" was added in between correct captions.

AFP found Duda's speech in the misleading posts corresponds to a segment from the live stream at the 33-minute and 19-second mark, but he makes no mention of military mobilisation to Ukraine.

"I hope that for decades to come, and God willing, for centuries to come, Ukraine will be a brotherly state to the Republic of Poland, the country where – as I hope President Volodymyr Zelensky prophetically said – there will be no border between them and ourselves,

"That there will be no border really; that we will live together on this soil, rebuilding and restoring our shared happiness and strength, something that will enable us to withstand every danger, and that will deter any attack or threat in the future," Duda said, according to a transcript posted on the official Presidential website.

As of May 26, AFP has found no official reports of Poland sending troops to Ukraine.

Below is a screenshot comparison between the video seen in the misleading post (L) and the YouTube video (R): 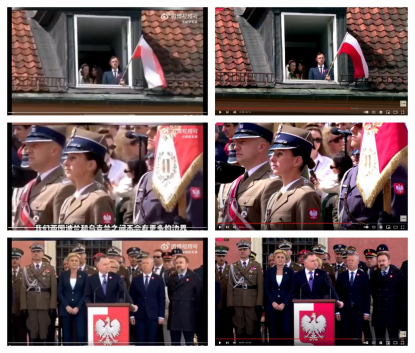 A spokesperson at Poland's Ministry of National Defence called the claim "absurd fake news that fits in with Russia's disinformation efforts".

"We treat the sensational reports about the alleged entry of the Polish Army into Ukraine as obvious propaganda actions of the Russian Federation aimed at achieving the effect of disinformation in the international media space, as well as the earlier absurdities about the partition of Ukraine with our participation," the spokesperson told AFP via email on May 24.