These photos show wildfires in the United States and Australia, not Pakistan

Four images have been shared hundreds of times in social media posts that claim they show a raging forest fire in Pakistan's southwestern Balochistan province in May 2022. Some of the posts were shared by Pakistani politicians and journalists. However, the pictures have been shared in a false context. They actually show wildfires in the United States and a bushfire in Australia.

Three images of burning trees were posted here on Twitter on May 20 by Abdul Wahid Siddiqui, a lawmaker for the conservative Jamiat-ulema-e-Islam-F (JUI-F) party in the Balochistan provincial assembly.

"The fire that broke out in Manda and Mughal Kot along the Koh-e-Sulaiman in Sherani district has destroyed valuable trees, causing millions of rupees of damage," the Urdu-language caption reads.

"Valuable birds are also burning and people's travel routes are blocked. There is no other way to extinguish the flames besides using helicopters." 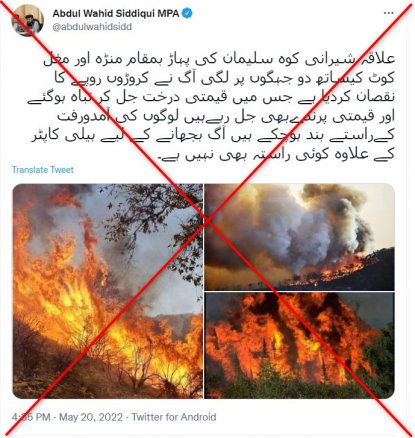 The images circulated as fires spread across the Sulaiman range -- also known as Koh-e-Sulaiman -- that stretches across Pakistan's west and centre.

The fires in Balochistan's Sherani and Musakhel districts were eventually put out in late May, but a large part of the area's pine and olive forests -- which provide the main source of income for thousands of local farmers -- was destroyed, Pakistan daily The Express Tribune reported.

The images were also shared more than 1,000 times alongside a similar claim on Twitter here; and on Facebook here, here, here, and here.

A Facebook post by Siraj ul Haq, leader of the Jamaat-e-Islami Pakistan party, containing all three photos was shared more than 700 times.

The photos were also shared individually in posts by Pakistani journalists Nadeem Khan and Nazir Leghari and the media outlet Samaa News.

One photo purportedly depicting the forest fire in Balochistan was posted on Twitter here by WWF-Pakistan and was shared 800 times.

The tweet was then used in a Voice of America (VOA) report viewed more than 100,000 times.

However, all of these images have been shared in a false context.

A reverse image search found the first image was published here on Getty Images on November 11, 2018.

"A wildfire burns at the Salvation Army Camp on November 10, 2018 in Malibu, California. The Woolsey fire has burned over 70,000 acres and has reached the Pacific Coast at Malibu as it continues [to] grow," the English-language description reads.

Below is a screenshot comparison of the first image in the false posts (left) with the photo as it appears on the Getty Images website (right): 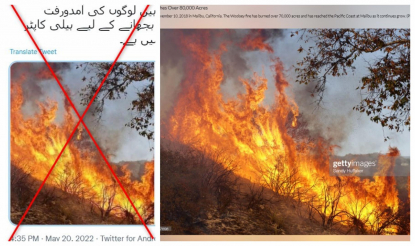 Getty credits the photo to Andrew Merry, who told AFP that the photo was taken on December 1, 2019.

The photo was also published in reports from 2020 on climate change by Forbes and The West Australian.

Below is a screenshot comparison of the photo in the false posts (left) with the photo as it appears on the Getty Images website (right):

A reverse image search found the third image in a CNN article published here on June 24, 2012.

"For 15 years Kari Greer has been documenting wildland fires and the men and woman who battle them," the article reads, below a slideshow of 13 photos.

The picture seen in the misleading post matches the sixth photo in the slideshow.

The description refers to a 2004 photo contest held by the United States Forest Service, where Greer's photo won second place in the "Wildland Fire" category.

An additional photo showing a deer near a raging inferno alongside the claim it was taken in Balochistan was shared on Twitter here on May 21, 2022.

"Sheerani Musakhel Balochistan. The damage has been done. The media and the champions of climate and wildlife remained silent while the fires raged for over a week," the post's English-language caption reads.

The Pakistani media outlet Waqt News also shared the picture on Twitter here on May 21.

However, a reverse image search found the photo published here by the Reuters news agency on May 3, 2013.

"A deer runs away from flames as a raging wildfire pushes towards the coast in Camarillo May 2, 2013," the English-language description on the Reuters website reads in part.

Below is a screenshot comparison of the image in the posts (left) and the photo published by Reuters (right):

AFP has previously debunked a false claim here that a video of a bushfire in Australia was filmed in Pakistan.