A photo of a Thai police officer pointing a gun during a brutal student massacre in 1976 has been shared thousands of times in posts that claim he was the father of the recently elected governor of Bangkok. This is misleading: although the governor-elect's father took part in crackdown operations on the protests, records show that the man in the photo was not his father. Thai experts also told AFP the man in the photo was not the governor-elect's father.

"This servant! He will not get my vote #BangkokGovernorElection," reads the Thai-language claim posted on Facebook on May 21.

The post shared a photo collage that includes a monochrome photograph of a police officer pointing a gun alongside another image of the recently elected Bangkok governor Chadchart Sitthipan.

The other three images show Chadchart posing with pro-democracy figures. 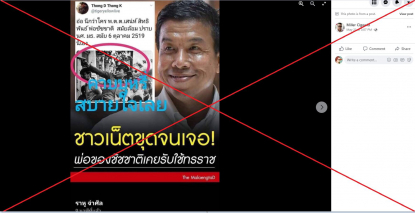 The Thai-language text superimposed on the image translates to English as: "Oh that's Police Major General Sanae Sitthipan, Chadchart's father during the crackdown on Thammasat University students on October 6, 1976.

"Smoking a cigarette, he was so chill. Internet users found out that Chadchart's father served a tyrant."

The claim circulated online one day before Thailand held an election for Bangkok governor on May 22.

Chadchart, who was one of 31 candidates who ran for the city's top job, won the election, leaving others trailing by a wide margin.

The October 6, 1976 massacre was a violent crackdown by Thai security forces and ultra-monarchist militias on protesters who gathered at Bangkok's Thammasat University to demonstrate against the return of a military dictator who had been deposed only three years before.

An identical image was shared alongside a similar claim on Facebook here, here, and here as well as on Twitter.

While it is true that Chadchart's father, Sanae Sitthipan, was part of the police operation that crushed the student protest in 1976, he is not pictured in the posts.

A reverse image search on Google found the identical image of the man with a gun published here on October 6, 2013, by the League of Liberal Thammasat for Democracy (LLTD).

The Thai-language caption reads: "Watcharin Niamvanichkul, the police officer in this picture whose most recent rank was Police Lieutenant Colonel, died earlier this year."

Below is a screenshot comparison between the image in the misleading post (left) and the image published on LLTD's Facebook page (right):

Documentation of Oct 6, a website about the massacre run by academics and then-student activists, also states that the police officer in the image was Watcharin Niamvanichkul, who then held the position of major general.

The description of the photo on the website reads: "Lieutenant Colonel Watcharin, the police officer in the photo who made international headlines, was smoking a cigarette while shooting and climbed into Thammasat from the fence in front of the main auditorium."

Puangthong Pawakapan, a professor at Chulalongkorn University's Faculty of Political Science, said the photo does not show Sanae.

"The man in the photo is not Sanae Sitthipan," Pawakapan told AFP.

Kritsadang Nutcharat, a Thailand-based human rights lawyer who was a former student of Thammasat University, also told AFP that the man in the photo is "definitely not Sanae Sitthipan".

Public records show that Sanae, who was a police major general at the time, was involved in the crackdown on the 1976 protests.

Records collected by the Documentation of Oct 6 website read: "Sanae and two other police commanders arrived at the university and took command at 7.50 a.m.

"At 8:10 a.m., Sanae directed patrol officers to 'prepare weapons for entry into the university."

Sanae served as the deputy commander of the Metropolitan Police Bureau in 1976, and retired in 1986, according to the Royal Thai Police.