An officer walks outside of Robb Elementary School in Uvalde, Texas, on May 24, 2022 ( AFP / Allison Dinner)

Social media users claim images of a person holding a transgender flag show the 18-year-old gunman behind a deadly Texas shooting spree. This is false; the posts misappropriate photos of a transgender artist who posted them on Reddit.

"NO mental illness here of any kind so let's blame the guns... Here is your Texas school shooter, 18-year-old Salvador Ramos, from North Dakota," says a Facebook post published May 25, 2022. "They will bury who this monster is."

The post includes several purported images of Ramos, who was killed by police after murdering 19 children and two teachers in a May 24, 2022 mass shooting at Robb Elementary in Uvalde, Texas, a town about an hour from the Mexico border. One photo in the post shows a person holding a blue, pink and white transgender flag. 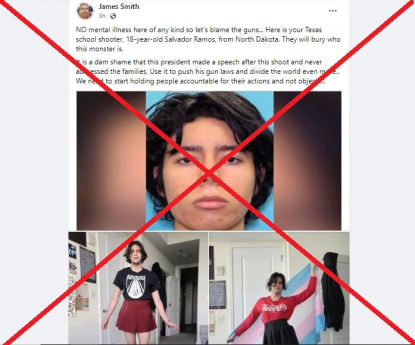 Similar posts in English and Spanish spread on Facebook, Instagram and Twitter as news of another mass shooting re-opened debate over guns, public safety and rights in the US.

The claim appears to have first circulated on the anonymous messaging board 4chan, where several users posted the same photo with the transgender flag on May 24, 2022.

Republican US Congressman Paul Gosar amplified the narrative in a now-deleted tweet in which he claimed Ramos was a "transsexual leftist illegal alien." Other social media posts have also falsely claimed Ramos, who Texas officials said was a US citizen, was an undocumented immigrant.

But some of the photos shared in the posts do not show Ramos and AFP could find no evidence that he was transgender.

A reverse image search indicates the photo featuring the transgender flag was published on Reddit in early April 2022.

"thought I'd provoke the transphobs," says the caption on the post from user Apprehensive_Ad_995.

On April 29, 2022, the same user posted a photo of the black T-shirt and red skirt featured in some of the social media posts. "I got a new skirt and I think it's my favorite," the Reddit post caption says.

Apprehensive_Ad_995, a self-identified transgender artist, has debunked claims that the images show Ramos. "it's not me, I don't even live in texas," the user said in a May 24, 2022 Reddit post.

"People are threatening me and harassing me for no reason. They are actively trying to ruin my life instead of helping the families who were affected," the user wrote in a comment on the May 24 thread. 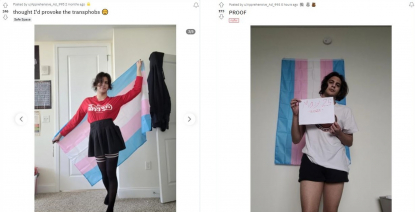 Other photos shared in the social media posts do show Ramos, who shot his grandmother before attacking Robb Elementary.

At least two images -- including a black-and-white photo and a mirror selfie -- stem from a now-removed Instagram account belonging to the teenager, who was reportedly bullied in middle school. Another image of Ramos against a blue background was released by local law enforcement officials.

AFP reached out to the Texas Department of Public Safety for additional comment.