Video shows house washed away during flood in Indonesia in 2021, not Bangladesh in 2022

A video has been viewed tens of thousands of times on Facebook after it was shared with a claim that it shows a house being swept away by raging floodwater in northeastern Bangladesh in May 2022. The claim is false; the clip has circulated online since December 2021 in reports about damage caused by flooding in Indonesia.

It shows a house being swept into a bridge by a torrent of water.

"God, please save our country from your wrath." 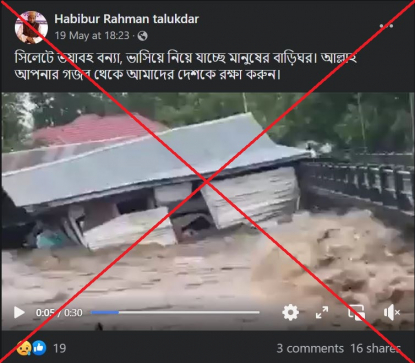 The same 30-second video has been viewed more than 52,000 times after it was shared here and here on Facebook with a similar claim.

Heavy rains caused widespread flooding in the Sylhet region, in northeastern Bangladesh, in May 2022, AFP reported.

The floods -- Bangladesh's worst in nearly two decades -- stranded about two million people and left at least ten people dead in the country.

A combination of reverse-image and keyword searches on Google found the video has circulated online since at least December 2021 in reports about flooding in Indonesia.

A longer clip was posted by Indonesian broadcaster Kompas TV on its official YouTube channel on December 7, 2021.

The post's title reads: "The Moment When Two Houses in South Sulawesi Province Washed Away by Floodwater."

According to the post's description and another report from sister media outlet Kompas.com, the incident took place at Cabbue River in Ompo sub-district, Soppeng regency, in Indonesia's South Sulawesi province, on December 6, 2021.

Below is a screenshot comparison of the video in the misleading post (left) and the video shared by Kompas TV (right).

The same video also appeared in a report about the flooding in Soppeng, posted on YouTube here by Indonesian media outlet Suara on December 6, 2021.

The bridge, as seen on Google Street View in June 2019, corresponds with the bridge that appears in the video.

Below is a screenshot comparison of the video in the misleading post (left) and the Google Street View (right).