The photo of a long queue in front of a McDonald's restaurant was shared on Twitter on March 10, 2022.

The tweet's simplified-Chinese caption translates to English as: "Getting a bite even if there's a queue! Video from Moscow on the evening of March 8, local time, after fast-food chain McDonald's announced it would withdraw from Russia, the line of cars stretched to almost half a mile." 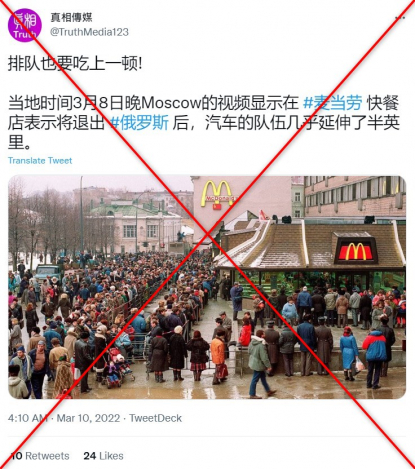 McDonald's, along with many Western businesses, announced it would pull out of Russia following the invasion of Ukraine, AFP reported.

The company, which claimed to have employed 62,000 workers in Russia, closed all of its 850 restaurants across the country in March.

The photo was also shared hundreds of times alongside a similar claim on Twitter, Facebook and Gettr.

It was also embedded in a news report on MSN by Taiwanese magazine Bella that made a similar claim.

Although local media in Russia reported here and here that Russians flocked to McDonald's restaurants in March 2022 before outlets closed, the photo has been shared in a false context.

An analysis of the photo shows a Soviet Union flag underneath the large McDonald's logo that overlooks the queue outside the restaurant. 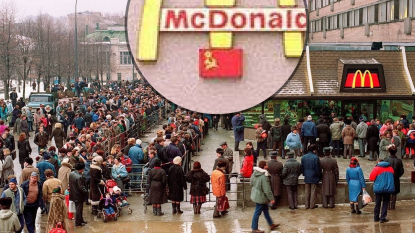 A reverse image search on Google found the image was originally taken by an AFP photographer on January 31, 1990.

The photo's caption reads: "Soviet customers stand in line outside the just opened first McDonald's in the Soviet Union on January 31, 1990 at Moscow's Pushkin Square."

McDonald's claims that it served more than 30,000 customers on its opening day in Moscow.

Below is a screenshot comparison of the photo in the Facebook post (left) and AFP's photo (right).