Social media posts claim that a bodyguard seen falling from a vehicle in a motorcade was the same security official who was previously filmed kicking a passerby while in a presidential convoy in Malawi. This is misleading: not only are the men different people but the two incidents happened separately – in Malawi and Kenya.

“The other day, a body guard kicked a pedestrian. This time, a bodyguard fell from a cruising car on a presidential convoy (sic),” reads a tweet published on May 18, 2022.

A video within the tweet shows a man in a suit holding onto the side of a moving vehicle and toppling off before regaining his footing and climbing into another car, apparently part of an official convoy. 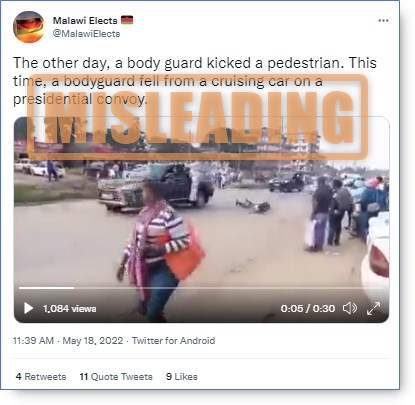 A similar claim in Chichewa, the most widely spoken language in Malawi, was posted a day earlier on Facebook and read: "The bodyguard who kicked the man on the bicycle in Chitipa has seen it. This is only the beginning." Chitipa is a town in northern Malawi.

The posts imply some kind of karmic justice at work – purportedly because the bodyguard who fell was guilty of previously kicking a passerby as a presidential motorcade drove past him.

However, a reverse image search revealed the incidents were unrelated.

According to Kenyan media, the bodyguard who fell was a member of Deputy President William Ruto’s security team which escorted him to a campaign rally held on May 16, 2022, in Kajiado county. 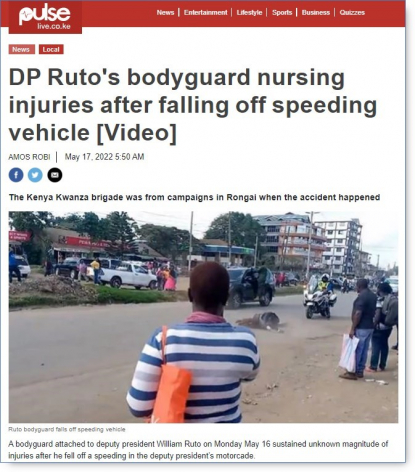 Using geolocation of markers in the video such as the red-branded butcher and the blue petrol station, AFP Fact Check confirmed the incident occurred in Rongai, a town in the same county where Ruto’s rally took place, and not in Malawi.

Another unrelated video went viral at the end of April 2022 in Malawi, also involving the security convoy of a politician.

In this video, a man dressed in blue overalls is seen pushing his bicycle on the side of an untarred road when a motorcade of black cars carrying the Malawian flag speeds past him.

An official dressed in military uniform who is hanging onto the side of one of the vehicles kicks the passerby to the ground.

You cannot treat people like garbage and worship God at the same time. #Malawipic.twitter.com/N3tCuPqxl8

According to media reports on April 28, 2022, the officer was part of Malawi President Lazarus Chakwera’s convoy in Chitipa.

Some have since called for a presidential apology and for action to be taken against the officer. Speeding presidential motorcades are a contentious topic in Malawi (here and here).

According to Section 123(1) of the country’s Road Traffic Act, motorists should always give way to the president’s convoy.