A photo taken on January 12, 2021 shows a field of wheat being harvested on a farm near Inverleigh, some 100kms west of Melbourne. ( AFP / WILLIAM WEST)

Agricultural bill does not ban Australians from growing their own food

Social media posts shared thousands of times claim a proposed law in the Australian state of Victoria will ban people from growing their own food. However, this is false. The bill, which aims to support the agricultural sector, contains no such provision, while Victoria's agricultural department refuted the claim.

"VICTORIA, AUSTRALIA: Premier Dan Andrews is passing a bill that prohibits people from growing their own food," reads a tweet from May 5, 2022 by an account called Apex World News.

"The Agriculture Legislation Amendment Bill 2022 has had its second reading in parliament. Biosecurity is stated as the reason for the changes."

The tweet was shared more than 3,000 times before it was deleted. 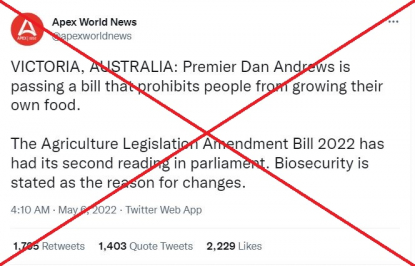 Screenshots of the tweet spread on Facebook in Australia, including here and here, and in the United States.

The claim was also shared in a French Telegram post viewed more than 12,000 times, which warned the bill would "stop people growing their own food", with "severe penalties" for landowners who prevented officials from entering their property to enforce the law.

"This is not a joke!! Anyone that uses their brain can see this gives more power to control the masses into submission, little by little they take control!" one comment read.

Another called the bill "disgraceful".

The posts refer to the Agriculture Legislation Amendment Bill 2022, which was still being debated in Victorian parliament on May 19, 2022.

The bill amends eleven laws, some of which date back to the 1980s and 1990s, covering various aspects of agriculture, including animal disease control and pesticides.

The legislation, which is available in full on the Victorian government's website, does not contain any reference to stopping people growing their own food.

"Globalisation and the expansion of trade have increased Victoria’s exposure to biosecurity risks and increased the rate of new incursions into the State. The amendments create new offences and impose new requirements to address these risks," said Jacinta Allan, the leader of Victoria's house parliament.

The bill allows authorised officers to enter land for inspection purposes, such as to investigate the source of a chemical contamination.

"The amendments will not result in the destruction of crops, nor will they prevent people growing their own food," it said.

A spokesperson for the Victorian government told AFP: "No one will be prevented from growing their own food as part of these changes, which are designed to support the agricultural sector which is worth AUD$17.8 billion to the state's economy each year and supports 67,100 jobs."

The Victorian Farmers Federation (VFF), a lobby group representing farmers in the state, said in a statement that the legislation had been misrepresented.

"Misinformation about the Bill suggests the authorised officers will be able to undertake searches without a warrant, without landholder consent and without the requirement to present identification," it said.

"The VFF believes this misrepresents and misinterprets the amendments set out in the Bill".

During a debate in parliament on May 5, transcribed on the Victorian parliament's website, opposition MP Roma Britnell defended certain elements of the bill.

"Some of these amendments do some good things, such as giving authorised officers improved access to enable them to investigate different events that need to take place so we can prevent weed infestation or infectious diseases in animals or biosecurity issues," she said.