Social media posts claim parents facing baby formula shortages should make it themselves. But pediatricians told AFP they do not advise their patients to use homemade formula, warning it may lack vitamins and nutrients key to helping infants grow and thrive.

Posts sharing the same ingredient list -- evaporated milk, water and Karo, a popular brand of corn syrup -- have been shared hundreds of thousands of times as parents in the US face nationwide shortages of formula products. 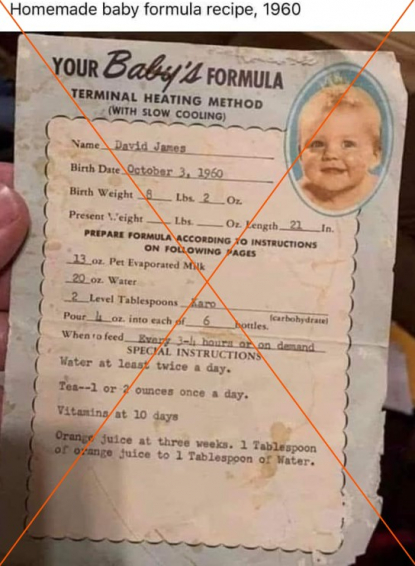 Parents say purchasing restrictions and price gouging have left them increasingly desperate to get their hands on the food required for infants who are not breastfeeding. But the American Academy of Pediatrics (AAP) cautions against formula made at home.

"I advise my patients not to make homemade infant formula," she told AFP. "It won't meet your baby's essential nutritional needs, can be very dangerous to their growth and development and can even make your baby sick."

In 2021, the US Food and Drug Administration (FDA) issued an alert following the hospitalization of "infants suffering from hypocalcemia (low calcium) that had been fed homemade infant formula."

Looking at the recipe circulating online, Altmann said the added sugar would not be safe or healthy for infants.

"Karo syrup was once used to help ease constipation, but it is not advised as it's not effective and can even contain harmful bacteria," she said.

Azza Ahmed, an associate professor of nursing at Purdue University, said homemade formula can put a baby at risk for "contamination and infection."

She said she understands the stress of the shortages, but pointed out that parents must never water down formula, as this can quickly lead to an imbalance of nutrition.

Ahmed, who is a certified pediatric nurse practitioner, also warned against importing formulas from countries that are not reviewed by the FDA. "We are not sure about the safety of shipping this formula and it is very expensive," she said.

The posts also claim orange juice mixed with water can be introduced at three weeks of age. But Altmann said that even though orange juice contains natural sugar, she would not recommend offering it to an infant.

"There is also a high amount of acidity that might not be good for your baby's digestion," she said.

The Academy of Breastfeeding Medicine also released a statement warning against juice and other formula substitutes.

"Do not give your baby under six months of age any water, tea, or juice," it said.

"Goat milk is almost identical to Mother's milk! It has no fat globules so it's easy to digest and it's lactose free! Babies do great on it. I've seen the results time and time again in my 27 years of raising, breeding and milking dairy goats," claimed a May 12 post with 15,000 shares. 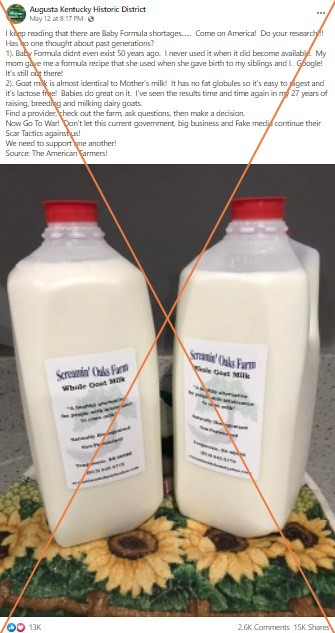 But goat milk lacks nutrients necessary for human babies, according to Gabrina Dixon from Children's National Hospital in Washington, DC. She pointed out its lack of folate and vitamin B12 -- which is necessary to stave off anemia, or a low red blood cell count.

Experts told AFP that parents need to consult with their pediatricians about feeding options. But they advised more open attitudes about switching formula brands or using generic products, especially for children who have not shown signs of sensitivity to ingredients.

Some options are available based on a child's age.

Ahmed said: "For pregnant women, we highly recommended them to think about exclusive breastfeeding" for the first six months of the baby's life.

For anyone currently breastfeeding but supplementing with formula, Ahmed recommended contacting a lactation consultant to learn methods for increasing milk supply, including through pumping. She also said donor breast milk can be an option, while cautioning that parents should work with a breast milk bank where the donors are screened and milk is tested.

For children who are six months old and have started eating solids, Altmann said toddler formula could be introduced. And Dixon said she advises the introduction of cow's milk a little sooner than the recommended 12 months of age.

"If your child is very close to a year of age, it's OK for a short period of time to give cow's milk," she said.

In both cases, the child would need to be monitored for iron deficiency.

The US Department of Health and Human Services has compiled additional resources for families dealing with the formula shortage.