A purported screenshot of an AFP news article claiming former Sri Lankan prime minister Mahinda Rajapaksa promoted rumours about the alleged resurgence of a militant separatist group in the crisis-hit island nation has been shared hundreds of times on Facebook. The posts circulated online following weeks of protests in the country as it faces a worsening economic crisis. But the screenshot has been doctored from a different AFP article. AFP has never published an article with the claim.

Rajapaksa resigned as Sri Lanka's prime minister on May 9 after his supporters attacked anti-government demonstrators who had been protesting peacefully for weeks over the country's worst economic downturn since independence.

Sri Lankans have faced shortages of food, fuel, and medicines, along with record inflation and lengthy blackouts. 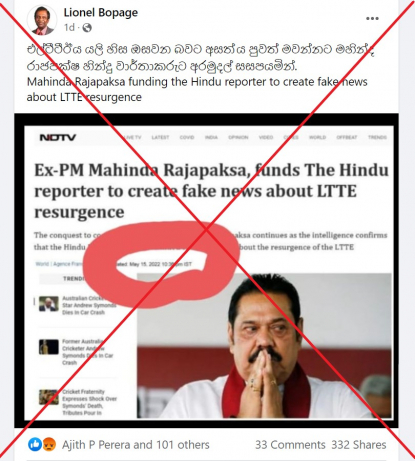 The Hindu article referenced in the post raised the alarm about a potential resurgence of the Liberation Tigers of Tamil Eelam (LTTE), also known as the Tamil Tigers, who waged a decades-long civil war against the Sri Lankan government but were defeated in 2009.

The report, which cites unnamed sources, said that LTTE groups were planning attacks on May 18 -- the day Sri Lanka's civil war ended in 2009.

A spokesperson from Sri Lanka's Ministry of Defense subsequently told The Hindu that its report was "completely baseless".

An identical image of the false news article was shared multiple times on Facebook, as seen here and here.

Comments from some social media users indicated they believed the screenshot showed a real report.

One user wrote: "Every time Mahinda is in crisis, the LTTE somehow magically regroups. He and his buddies at Hindu should know that there are no fools in Sri Lanka who will believe these claims".

Another user commenting on the screenshot wrote: "Immediately arrest this lunatic Mahinda and take immediate steps to investigate these claims!"

But the screenshot had been doctored from another article.

Neither AFP nor NDTV has published an article with the claim in the false article.

A reverse image search on Google found the doctored screenshot had been altered from this AFP article published by NDTV on May 12, 2022.

It features the same layout and lead photograph, but a different headline.

Below is a screenshot of the AFP article published by NDTV on May 12, 2022: 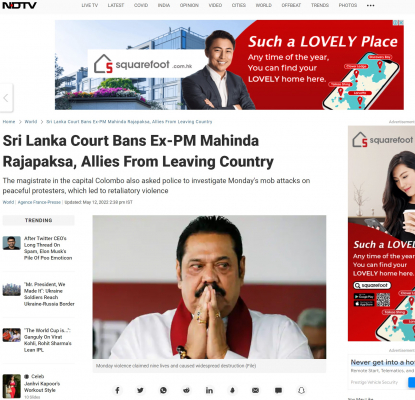 Below is a comparison of the image in the misleading posts (left) and the original AFP article published by NDTV (right): 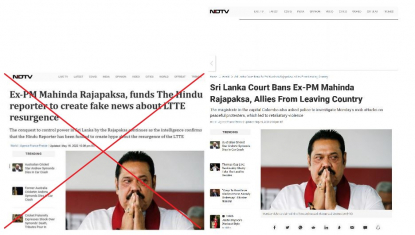 Screenshot comparison between the purported screenshot in the misleading posts (L) and the original NDTV article (R):

In a statement to the media, Sri Lanka's Ministry of Defense said it would investigate the claim made in The Hindu report that the LTTE was planning an attack on May 18.

As of May 19, there have been no official reports about such an attack.