Skip to main content
A streetcar is seen in traffic in Toronto, Canada, in 2019 ( AFP / Olivier Monnier)

Social media posts suggest an electric vehicle (EV) charging station in Canada is powered by a diesel generator, pointing to the apparent contradiction of supplying power to low-emission vehicles with a fossil fuel. This is false; the local government said the generator is used as an emergency power source for municipal infrastructure and does not supply power to the charging station, and most of Ontario's electricity comes from low-carbon sources.

"Hey Seamus what's that big black thing with a fence around it in the background. That's not a Diesel Generator is it??!!!" says text above an image of a tweet from a Canadian politician in a May 7, 2022 Facebook post that has been shared more than 1,300 times.

The original tweet and other Facebook posts suggest, without evidence, that diesel fuel is used to power this EV charging station, a recurring narrative in social media posts about battery-powered cars. It resurfaced as gasoline prices reached record highs in Canada in May 2022. 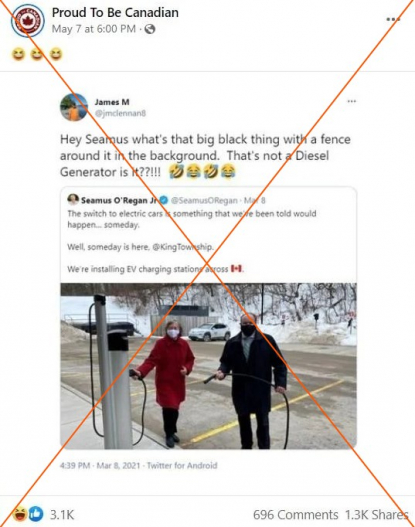 The posts share a screenshot of a March 8, 2021 tweet by then-federal minister of natural resources Seamus O'Regan celebrating the unveiling of new EV chargers in the Township of King, north of Toronto.

Zooming in on the object in the background of the photo reveals the name "Generac," a backup power generator manufacturer.

Searching in Google Maps for EV chargers in the Township of King leads to the parking lot of the King Township Municipal Centre, where the generator can be seen:

Screenshot taken on May 11, 2022, shows a Google Maps satellite image

But it is not a diesel generator and it does not power the EV charger installed in the parking lot, according to the local government.

Donna Kell, a spokeswoman for the Township of King, told AFP that it is actually "a natural gas generator used to support a critical piece of Township infrastructure in the event of a power outage."

She said: "It has no connection to the EV charging station."

These posts circulated amid a push by Ottawa to electrify its transport sector, which amounts to almost a quarter of the country's greenhouse gas (GHG) emissions.

The Canadian government announced that all cars and passenger trucks sold in the country will have to be zero-emission by 2035 as part of its commitment to reach net-zero GHG emissions by 2050.

Studies show that in the long run, electric vehicles have a lower carbon footprint than gasoline-powered cars.

But reductions in emissions compared to conventional vehicles will vary depending on the type of car and type of driving, as well as whether a country is more reliant on fossil fuels such as coal than on renewable energies such as solar or hydroelectric.

The Canadian government provides a breakdown of CO2 emissions by vehicle and province here.

Screenshot taken on May 11, 2022 of a pie chart detailing electricity generation by source in Ontario

Driving an electric car in Ontario emits significantly less CO2 than most of its petroleum-powered counterparts, as shown in data from the Canadian government. 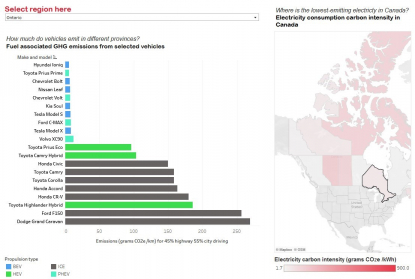 Screenshot taken on May 11, 2022, of a bar chart detailing the CO2 emissions of different vehicles per kilometer driven

AFP has examined other misleading claims about the environmental impact of hybrid cars and renewable energy.