An image has been widely shared on social media in Kenya alongside a claim that it shows Deputy President William Ruto grinning while viewing the body of Kenya’s third president Mwai Kibaki in Nairobi’s parliament building. But the photo has been digitally altered; the original image published by Kenyan media does not show Ruto grinning.

The post, captioned “Ruto laughing at kibaki body (sic)”, was published on Facebook on April 26, 2022. On the same day, it was published on Twitter where it has been retweeted more than 60 times. 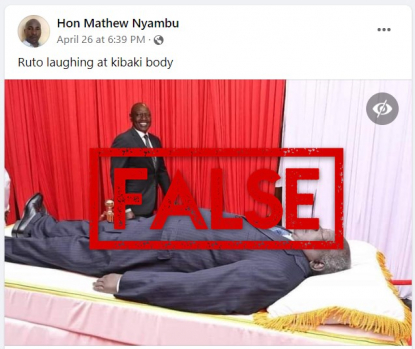 The image was also shared in other Facebook posts (here and here).

Some of the posts on Facebook featured a screenshot of a now-deleted tweet by political analyst Mutahi Ngunyi.

“Who SMILES with all 32 TEETH when the nation is MOURNING? The BROKE man is LYING,” the tweet read.

Kenya is preparing to hold general elections in August 2022, with Odinga and Ruto seen as front-runners in the presidential race.

Kibaki’s rule saw the most violent election in Kenya’s history when more than 1,100 people died in ethnic clashes following the disputed December 2007 polls. However, he also oversaw the adoption of a new constitution with reforms aimed at preventing such conflicts.

Kibaki's body lay in state at parliament for three days for public viewing before he was buried in Othaya, Nyeri county on April 30, 2022.

But the photo shared in the posts has been digitally manipulated to create the impression that Ruto was grinning during a moment of mourning.

AFP Fact Check found no evidence of Ruto smiling while paying his last respects to Kibaki.

A reverse image search conducted by AFP Fact Check found the original version of the photo published on the Capital News website on April 25, 2022. 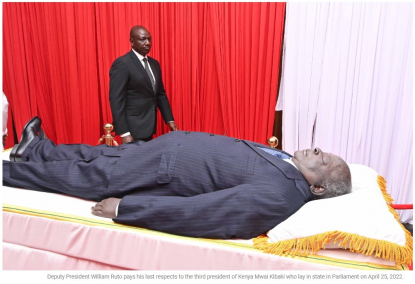 Screenshot showing the original image posted on the Capital News website, taken on May 3, 2022

A closer examination shows that Ruto’s image was digitally manipulated and his head replaced with a photo in which he is grinning.

Comparison screenshots of the altered image (L) and the original picture