A video viewed hundreds of thousands of times on social media appears to show a Chinese official warning that residents could face the death penalty if they do not wear a mask in public. But the video was edited in a misleading way to combine unrelated remarks from Beijing's justice department. People in China do not face the death penalty if they fail to wear a mask outside. However, they do risk capital punishment if they knowingly conceal their contact history in Covid-19 outbreak areas.

"Director of Beijing Municipal Justice Bureau: Failure to wear a mask can result in a prison sentence of more than ten years, or even the death penalty! The all powerful empire," reads the text in the Chinese-language tweet. 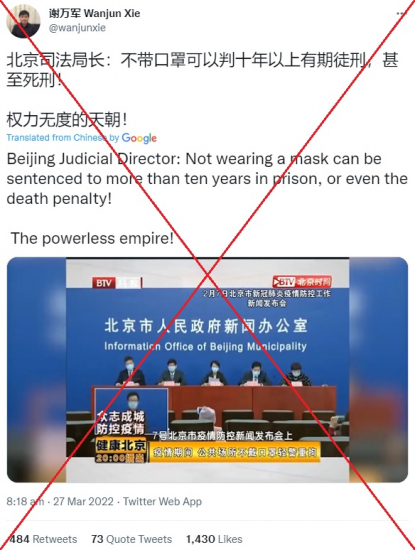 The claim was posted alongside a 34-second-long clip that bears the logo of the science and education channel of the state-owned Beijing Radio & Television Station (BRTV).

The text superimposed on the clip reads: "February 7 press conference on prevention and control of Covid-19 in Beijing".

The clip has two parts: the first features a Chinese voiceover and shows officials at a Beijing press conference.

Part of the messages conveyed by the voiceover translate to English as: "In light of the issue of masks not being worn in supermarkets, buses, subways, and other public areas, Li Fuying, Director of the Beijing Municipal Bureau of Justice, says that Covid-19 prevention and control is not just the responsibility of government departments and medical institutions. Every citizen has the obligation to participate and cooperate."

The video, alongside similar claims, has been viewed more than 150,000 times on multiple social media platforms, including on Twitter here and here, as well as on Gettr here and here.

But the news clip has been edited to be misleading: it combines two unrelated statements made by Li during the press conference.

The minutes of the conference published by the Beijing Municipal Justice Bureau on February 8, 2020, show that Li -- who has since left the bureau -- did mention mask-wearing and the death penalty at the conference, but made no connection between the two.

Li said the penalties for people who refused to wear a mask and caused any conflict over the issue could be faced with warnings or even detention, according to the minutes.

"In enforcing [the mask rule], those who refuse to follow advice and even cause contention and conflict will be faced with penalties as set out by the law, minor cases will be given a warning, while serious infringement could be detained," Li said.

"These behaviours could be considered a threat to public safety under the law, and minor cases could be charged with up to three years jail, while serious offenders could face more than 10 years imprisonment, life sentences or even the death penalty," Li said.

A longer video of the conference broadcast by BRTV on February 7, 2020, filmed from a different angle, is available here.

Below is a screenshot comparison of the video shared in the misleading social media posts (left) and the separate clip of the conference published by BRTV (right):

People's Daily and Reuters, among others, reported on the same press conference but made no mention of China announcing the death penalty for not wearing a mask.

As of May 5, BRTV has not responded to AFP's request for comment.