Skip to main content
A World Economic Forum (WEF) logo at the Congress Center in Davos in 2012. ( AFP / Fabrice COFFRINI)

Fictional footage from a British TV thriller has been viewed tens of thousands of times in social media posts that claim it is a World Economic Forum (WEF) advert in which a man suggests he should kill a woman's son to prevent carbon emissions generated over his lifetime from impacting the planet. But the claim is false; the WEF told AFP it did not produce or post the video, while the production company of the programme also said it had not authorised the footage for such use.

"WOW! How's this for disgusting? This video is so disturbing and UNNECESSARY that you would not believe it's an actual commercial done by the WORLD ECONOMIC FORUM. Check out the credits at the end," reads a Facebook post on April 26, 2022, which shares the clip.

In the purported advert, a man tells a woman after she mentions her concern about climate change: "Nothing uses carbon like a first world human, yet you created one."

"In fact , if you really cared, what you could do is cut his throat open, or I could do it for you," he continues, referring to the woman's son.

At the end of the video, a WEF logo appears on the screen, along with the URL for the Great Reset -- the name of the forum's 50th annual meeting, held in June 2020. 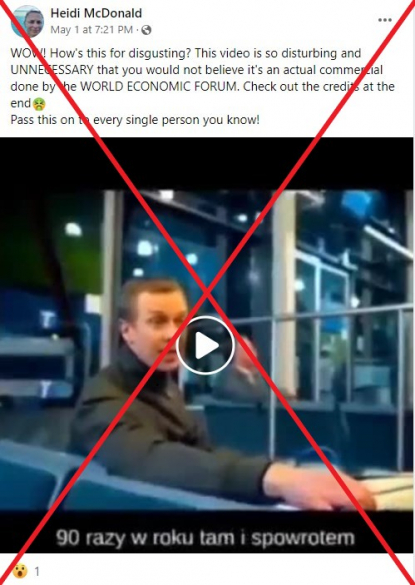 The Great Reset is an initiative launched by the WEF and Prince Charles in 2020 in a bid to fix long-standing problems exposed by the Covid-19 pandemic.

The plan to "revamp all aspects of our societies and economies" involves everything from building "green" urban infrastructure to changing wealth taxes. But it has been targeted by conspiracy theories branding it as a secret plan to control populations or deliberately create epidemics.

The clip has also been seen more than 33,000 times on Facebook here, as well as shared here, here and here.

However, the video is unrelated to the WEF or its Great Reset annual meeting.

A Google search of the dialogue in the video led AFP to a clip from season two, episode six of the British TV series Utopia, released in 2014.

The thriller follows a group of people who find themselves being tracked down by a merciless organisation after they discover a graphic novel that predicted several disastrous epidemics.

The clip appears at the 39-second mark in this YouTube video.

At the end of the footage, text reading "UTOPIA" on a green background is shown instead of WEF-related text.

Below is a comparison between the misleading post (left) and a clip from the TV programme (right):

A spokesperson for Kudos, the production company behind Utopia, told AFP on May 4, 2022, that it has "not given permission for this use".

A WEF spokesperson told AFP on May 8, 2022 that the clip was "deliberate and malicious misinformation and of course this video was not produced or ever posted by the World Economic Forum".

The Great Reset advert posted by the WEF's official YouTube channel on June 3, 2020 does not include the clip. It shows footage from the Covid-19 pandemic, environmental disasters and protests across the world.

The clip shared in the misleading posts cannot be found on the WEF's official YouTube channel, its official website or on the official Great Reset site.

AFP has previously debunked other claims about the WEF here and here.