Multiple social media posts shared pictures of statues purportedly sculpted in the likenesses of South Africa's liberation heroes Oliver Tambo and Winnie Mandela. The posts allege the statues cost taxpayers R15 million ($955,516). But the claim is false; the owner of the guest house where the statues are displayed said they are of his relatives. Furthermore, the South African government denied that it commissioned them.

A Facebook post shared more than 3,600 times since its publication on April 17, 2022, included pictures of two statues of unrecognisable figures. It has since been deleted but was archived here.

The post’s caption reads: “This is not a late April fool's joke no, apparently these two “masterpiece” statues of Oliver Tambo & Winnie Mandela Cost more than R15 million of taxpayers money in ??? Really ? (sic)”. 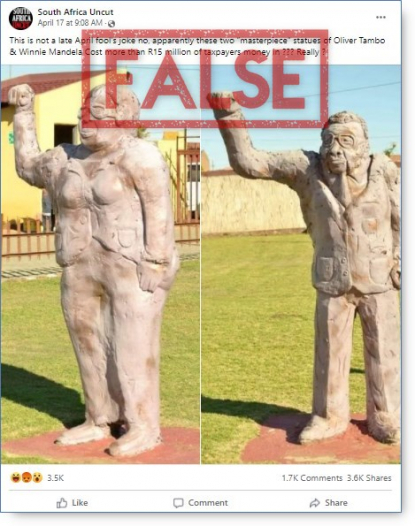 Some in the comments section of the post believed the claims were true, with users suggesting that the ruling African National Congress (ANC) party could have spent the money better. 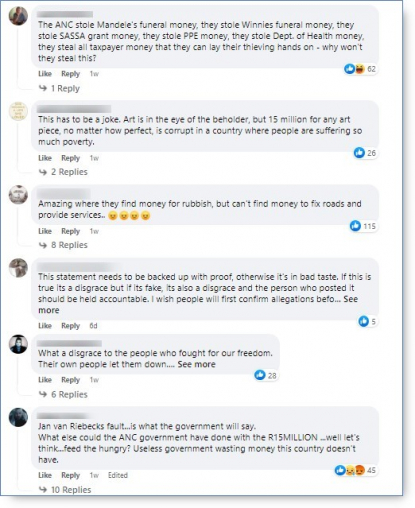 Comments under the misleading Facebook post revealed that the statues are in Raisibe Gardens guest house in South Africa’s Mpumalanga province. This came to light after a user shared a debunk by the Facebook page Busting The Myth Of White Genocide In SA.

The controversy reached the owner of the guest house, Fanyana Sibanyoni, who said in videos posted to Raisibe Gardens’ Facebook page on April 21, 2022, that it was “a private place” and that “it has nothing to do with government”.

He said the statues are of his family members, not the liberation heroes as claimed in the posts.

He explained that the statue said to be Winnie Mandela is actually of his aunt and that they share no resemblance.

“The guy who posted this thing was reckless, he must go back and correct the statement. The government have never put a cent in this place, this is my place,” he said in the video.

South Africa’s Department of Culture, Sport and Recreation (DCSR) in Mpumalanga “condemned” the misinformation in a statement on April 19, 2022.

“Neither the Department nor the Provincial Government has ever commissioned such statues. As such we reject any information which suggests spending money for such statues,” said DCSR spokeswoman, Sibongile Nkosi.

Nkosi added that as the custodian of arts and heritage in Mpumalanga province, commissioning such statues would have required all stakeholders be involved in the process, which was not the case.

“The fact that information of this nature was never communicated, this simply means our provincial government has nothing to do with the statues.” 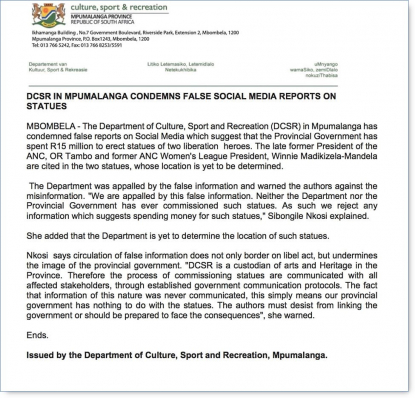 The statement by the department, published on April 19, 2022

Nkosi warned the authors of the social media posts to “desist from linking the government”.