As citizens of the Philippines abroad began early voting for the country's next president, a video was viewed tens of thousands of times in social media posts that claim it shows a woman in Hong Kong complaining her vote for frontrunner Ferdinand Marcos Jr was wrongly counted for his top job rival Leni Robredo. This is false: the video was doctored to add the reference to Robredo. The unedited version has circulated online since at least 2016. The Philippine elections agency told AFP it had not received complaints of wrongly counted votes during early overseas voting in the 2022 presidential election as of April 29.

The video was shared on Facebook on April 14. It has been viewed more than 35,000 times.

Tagalog-language text overlaid on the video translates to English as: "VOTED FOR MARCOS. BUT [THE VOTE] WAS REGISTERED FOR LEN-LEN."

Robredo made a last-minute decision to enter the presidential race in October after Marcos Jr declared his candidacy.

That set up a rematch with her rival in the 2016 vice presidential contest that she narrowly won.

The late dictator's son sought to overturn the results and alleged massive cheating but the Philippine supreme court dismissed the protest in 2021 for "lack of merit". 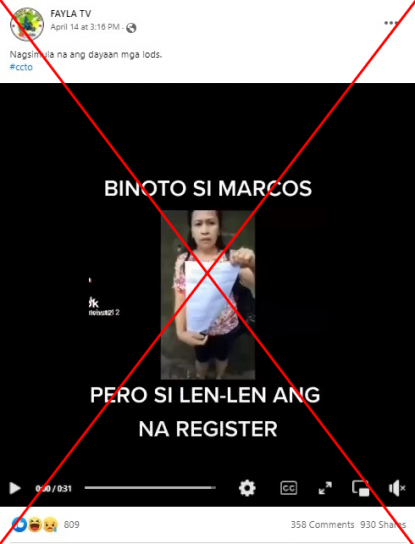 The 31-second video shows a woman talking to several people not seen on camera.

"Who did you vote for 'vice'?" someone standing off-camera be heard asking in Tagalog language.

"Then what name was printed [in the ballot receipt]?" the person asks.

The woman's response is not audible and appears to have been bleeped out.

The video circulated online after early voting in the Philippine presidential elections started for overseas Filipinos from April 10.

The same video was shared alongside a similar claim in Facebook posts here, here, and here.

Comments on the video indicated some social media users were misled.

"This is magic. Voted for BBM but Leni's name came out of the vote counting machine? Isn't it clear that they're cheating BBM again?" one commented, using Marcos Jr's initials.

"#LawyersForLeni, please investigate this and make the perpetrator pay," another wrote.

But the posts are false.

A review of the video shows a text overlay that reads: "2016 elections".

Keyword searches combined with a reverse image search of the video's keyframes extracted using the verification tool InVid-WeVerify found a longer version of the same video posted on May 1, 2016.

In the clip, the woman's answer to the question "what name was printed [in the ballot receipt]?" can be clearly heard.

"Honasan. That's why I was surprised because that's the first [position I shaded] – vice", she says at the clip's seven-second mark.

Honasan refers to former senator Gregorio Honasan II, who ran for vice president in the 2016 elections against Marcos Jr and Robredo.

There is no mention of Robredo in the longer 37-second clip.

Additional keyword searches found another video of the same woman being interviewed, published on YouTube on May 1, 2016.

The four-minute clip states the woman complained that her vote for Marcos Jr was counted for Honasan. She did not mention Robredo in the interview.

The Philippine Commission on Elections told AFP it could not immediately verify the status of the woman's complaint.

It has not received complaints about wrongly counted votes from overseas voters in the 2022 presidential election as of April 29, it added.

The alleged vote discrepancy in the video was "most likely due to errors by the voter in accomplishing the ballot", the Philippine Consulate General in Hong Kong told AFP on April 22.