A photo has circulated repeatedly in news articles and social media posts which claim it shows the crash site of a China Eastern Airlines passenger jet that plummeted into a mountainside in southern China in March 2022, killing everyone on board. However, the photo actually shows the aftermath of another plane disaster in Russia in 2011.

Captioned "Aerial photo taken after China Eastern Airlines crash" and credited to Chinese social media network Weibo, the photo is included in a Chinese-language report about the March 21 incident. 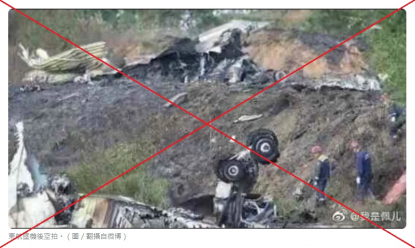 The Boeing 737-800 was flying between the cities of Kunming and Guangzhou when it nosedived into a mountainside, disintegrating on impact and killing 132 people, AFP reported.

The cause of the disaster -- China's deadliest plane crash in more than 30 years -- is not yet known.

The same photo has been published with a similar claim by Chung T'ien Television in other articles here and here, on YouTube here, Twitter here, and Chinese question and answer site Zhihu here.

However, the photo actually shows the site of another plane crash in Russia in 2011.

Below is a screenshot comparison of the photo shared in the misleading posts (left) and the photo published by AFP (right):

The description of the image published by AFP reads: "A handout photo provided on September 7, 2011 by Russia's Emergency Ministry shows the wreckage of a Yak-42 passenger jet No 42434 that crashed on takeoff near Yaroslavl's city airport, some 300 kilometres (185 miles) northeast of Moscow, killing 44 people.