As Philippine Vice President Leni Robredo battles to close the gap with her presidential rival Ferdinand Marcos Jr before polls on May 9, 2022, social media posts have repeatedly claimed Robredo's daughter admitted on Twitter to making a sex tape. But this is false: the posts feature an old tweet by Robredo's daughter Aika that was part of a 2016 online campaign in support of an opposition senator.

It reads: "I would like to testify in the [House of Representatives]. It was me in the sex video. #EveryWoman".

The caption of the post reads in part: "To Aika Robredo: You won't need to testify. This public admission, I believe, would suffice." 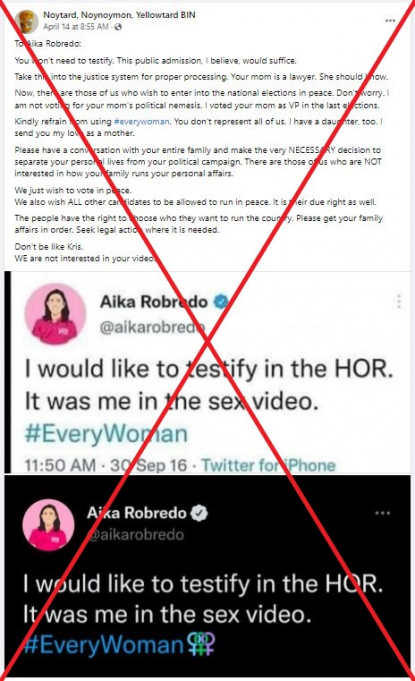 Robredo has been a major target of false and misleading posts often fanned by supporters of her rival for the top job, Marcos Jr.

Comments on the posts suggest online users were misled.

"So she really admitted it," one wrote.

"She confessed because it did not get viral enough," another commented.

"That tweet was in support of Sen Leila de Lima," she told AFP on April 21.

In 2016, unsubstantiated allegations swirled that the senator had a sex video and, according to local broadcaster GMA News, the alleged video would be shown in a public hearing at the House of Representatives.

The senator was arrested in 2017 on charges she said were meant to silence her; she remains in police detention.