Skip to main content
Philippines' Vice President and opposition presidential candidate Leni Robredo returns a signed placard to one of her supporters during a campaign rally in the business district of Pasig city, suburban Manila on March 20, 2022. ( AFP / Ted ALJIBE)

Facebook posts shared hundreds of times ahead of the Philippine presidential elections claim the government's law office said top job hopeful Vice President Leni Robredo "handled zero cases" as a lawyer before she entered politics. This is false: the Public Attorney's Office told AFP it did not issue such a statement. A Philippine trial court told AFP Robredo was legal counsel for a homicide case in 2008, and multiple reports state she took on cases for the disadvantaged.

The post features an image of Robredo with overlaid text that states: "So that's why she has a clean record... literally no cases. Her supporters keep mentioning she's an attorney but she never handled any case, the information is from the Public Attorneys Office.

"List of cases handled by Leni Robredo as a lawyer: Zero (no record)." 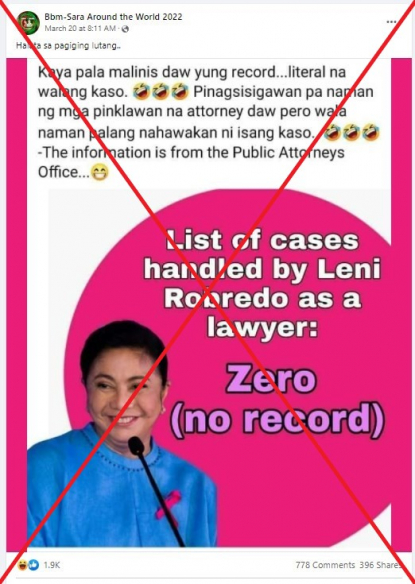 Robredo has been at the receiving end of false and misleading online posts, often fanned by supporters of her rival for the top job, frontrunner Ferdinand Marcos Jr.

Robredo, originally a lawyer for the disadvantaged, rose to fame as the wife of Jesse Robredo, a respected cabinet member in former president Benigno Aquino's administration.

When her husband died in a plane crash in 2012, public clamour encouraged her to enter politics.

Some users appear to be misled.

"One thing's clear if she did not handle any case, she's a sleeping defender, a low-quality lawyer," one wrote.

"She had no client because she could not be trusted," another commented.

"Considering that VP Leni's stay in the PAO happened around 25 years ago, our office has no available record on the cases she handled. Nonetheless, the PAO confirmed that VP Leni indeed served as a public attorney in the past."

Google keyword searches found Robredo made references to a homicide case she handled in 2008 in Facebook posts here and here.

The case was dubbed in news reports as the "Mother's Day Massacre".

The trial court that heard the case in Naga City south of the capital Manila told AFP Robredo was legal counsel for the family of the victims.

"In reference to your query whether Leni G. Robredo was the legal counsel of the Mothers Day Massacre way back in 2008, I would like to inform you that the same is true," a representative from court told AFP on April 25.

The court said the perpetrators were found guilty and were sentenced to jail for "attempted robbery with multiple homicide and frustrated homicide".

Robredo worked with the farmers in 2007 in their decade-long fight to own their ancestral land, the reports state.

Bajekjek Orquillas, a farmer from Sumilao, told AFP Robredo was one of the lawyers who helped their group.

"Vice President Leni was one of those lawyers who coordinated our march and educated us and various sectors about our case," Orquillas said.

According to the show, Ocsales was able to reclaim a piece of land back in 2012 with the help of Robredo.