Anthony Fauci was not arrested by US military

An online article claims that American special forces arrested top US infectious disease expert Anthony Fauci on April 9, 2022 on charges of treason, malpractice, conspiracy and homicide. This is false; the Pentagon called it a "total and utter fabrication," the health agency Fauci heads denied the claim, and the scientist has made public appearances after the date of the alleged arrest.

"Special Forces Arrest Deep State Dr. Anthony Fauci," says the headline of an article published April 10, 2022 on Real Raw News, a site which maintains that it contains "humor, parody, and satire." However, the label is not included on the story's page, and its previous stories, including this one, have confused users sharing them as fact.

"THE FIRST ARREST WILL SHOCK THE WORLD," says an April 11 Facebook post sharing the article link to a group of more than 31,000 members. 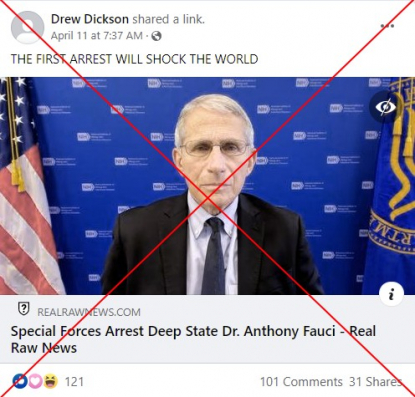 Since early 2020 when the Covid-19 pandemic began, National Institute of Allergy and Infectious Diseases (NIAID) director Fauci has been the face of the US government's response to the health crisis and has repeatedly been the target of misinformation as well as threats and harassment.

A spokesperson for NIAID said the claim that the US military arrested Fauci was "a fabrication."

And the Pentagon said that the story is "completely false. A total and utter fabrication and abuse of the word news."

Representatives for both NIAID and the military also confirmed that the follow-up claim that the immunologist was "sentenced to hang" is false.

Fauci was interviewed by ABC News about the rise in Covid-19 cases in the United States on April 10, the day after he was purportedly arrested, and appeared on MSNBC on April 11.