A photo of a Jesus Christ statue dressed in a pink gown has been shared repeatedly in multiple Facebook posts alongside a claim it was created by supporters of Philippine presidential candidate Leni Robredo, whose campaign colour is pink. This is false: a reverse image search found the same photo has been shared repeatedly online since at least April 2018 -- more than three years before Robredo announced her presidential bid.

The image was posted on Facebook on April 14, 2022, less than one month before voters in the Philippines were set to go to the polls.

It circulated online in the Catholic-majority country as worshippers marked Holy Thursday.

The Tagalog-language caption translates to English as: "Don't you have any respect for the lord anymore? You even dressed the nazarene in pink, dragging it into your desperate acts for leni."

Robredo, the incumbent vice president, has been trailing behind arch-rival and presidential frontrunner Ferdinand "Bongbong" Marcos Jr in the race for the top job, AFP reported.

Philippine social media has exploded with support for Marcos Jr, driven by a massive misinformation campaign aimed at revamping the family brand.

In the Philippines, "Nazarene" refers to the life-sized image of a dark-skinned Jesus Christ carrying a cross. 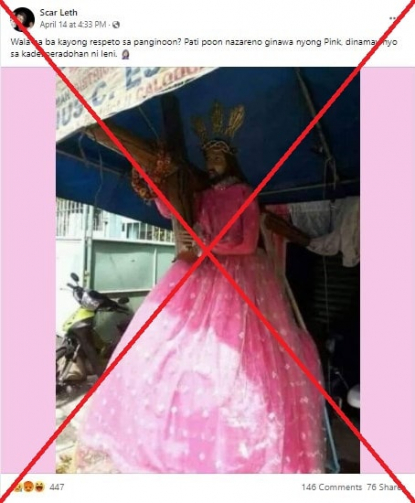 Comments on the post indicated some users were misled.

"They are even dragging God into their campaign," one user wrote.

"The pink allies have no respect! God will make you pay," another commented.

The photo was shared alongside a similar claim here, here and here.

However, the claim is false as the image predates Robredo's election campaign.

A reverse image search on Google found the same photo in an unrelated Facebook post shared here on April 15, 2018.

The caption translates as: "Why is the nazarene dressed in Pink? Is he gay? Just a question. Thanks."

Below is a screenshot comparison of the photo in the misleading posts (left) and the same photo shared in April 2018 (right): 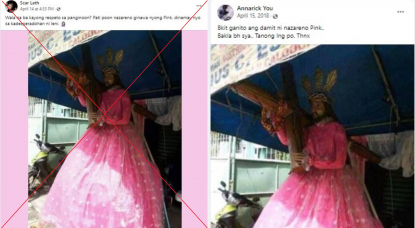 It was also shared in other unrelated posts on Facebook in June 2020, as well as in March 2021.

Robredo only announced her bid for the presidency in October 2021.

The vice president also said a video message posted on her official social media accounts in October 2021 that pink was not only her campaign colour but also a representation of the future and "a way of life".