A graphic has been shared in multiple posts on Facebook alongside a claim it contains a quote from Philippine Vice President Leni Robredo that bats are the "enemy" in the novel coronavirus pandemic. The graphic is attributed to Inquirer.net, a Philippine media outlet. The claim is false; the graphic has been doctored from an earlier Inquirer.net post in which Robredo was quoted about confusion surrounding the government’s response to the coronavirus outbreak.

The graphic was published in this Facebook post on March 17, 2020 and has been shared almost 200 times. It quotes Philippine Vice President Leni Robredo.

The post's layout is identical to graphics published by Inquirer.net and includes a link to the organisation’s website. 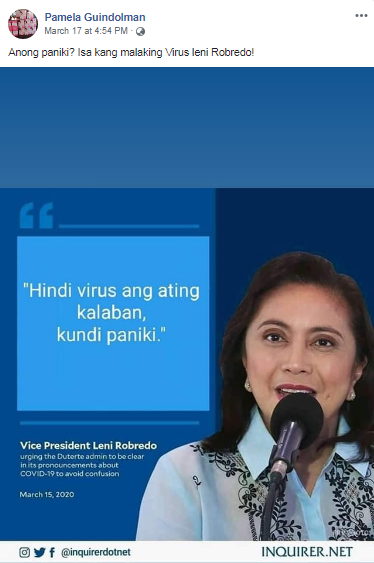 The Tagalog-language quote in the graphic translates to English as: "The virus is not our enemy, but bats.”

The post’s caption translates to English as: "What bats? You're a big Virus leni Robredo!"

Some comments on the post from Facebook users indicated that they believed the quote attributed to Robredo to be genuine.

Some of the comments translate to English as: "Our vice president is getting senile"; "She is so stupid"; and "Go ahead have all bats killed vice pres.they're the enemy after all / God made bats / humans abused them".

Below is a screenshot of some of the comments:

The spread of the novel coronavirus, COVID-19, has been declared a global pandemic by the World Health Organization (WHO). It was first detected in the Chinese city of Wuhan in December 2019. Scientists around the world are racing to develop a vaccine for COVID-19, which they suspect may have originated in bats or snakes, AFP reported here on January 23, 2020.

The same graphic was published alongside a similar claim in separate Facebook posts here, here and here.

“The Inquirer.net did not produce the image,” the outlet said in this Facebook post on March 18, 2020. Inquirer.net also published a side-by-side comparison of the manipulated graphic and the original quote card, telling readers to “beware of edited images”. 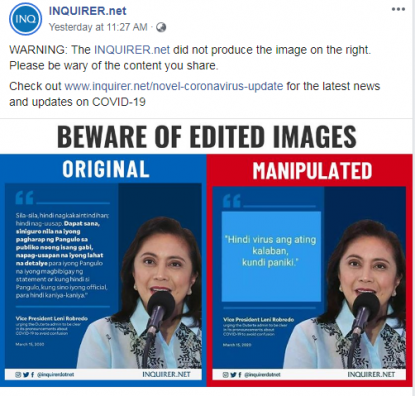 The original Inquirer.net quote card, which was published on Facebook here on March 16, 2020, quotes Robredo commenting on confusion surrounding the government’s response to the coronavirus outbreak. The report on her remarks was published here.

“There’s confusion among them; they’re not talking. Ideally, they should’ve ensured that when the President faced the public the other night, they’ve already talked about the details so that the President when he gives the statement or if not the President, whoever official, so it would not be to each his own,” Robredo said, according to Inquirer.net’s translation.

A Google search of the quote stated in the fake graphic also found that there is no publicly available evidence to suggest that Robredo made the alleged remarks about bats.