A photo has been shared in multiple Facebook posts that claim it shows a SriLankan Airlines pilot who tested positive for the novel coronavirus, COVID-19. The claim is false; the local health authority told AFP the pilot is not pictured in the photo; the man wrongly identified in the posts denied the claim.

The photo, showing a man standing among dozens circled in blue, was published here on Facebook on March 17, 2020. It has been shared more than 620 times. 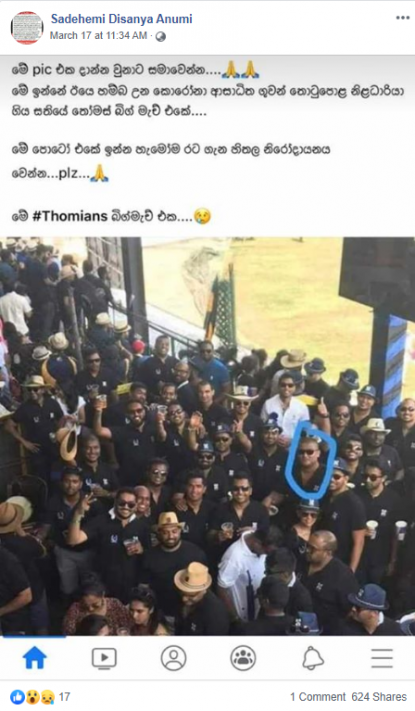 The Sinhala-language text above the image translates to English as: “Apologies about having to put up this pic… Here is the airport officer who was found to be testing positive for corona infection yesterday, at last week’s big match… All those in this picture, please think of the country and go into quarantine...plz… This is the #thomians big match…”

Sri Lanka’s flag carrier SriLankan Airlines on March 16 announced in this statement that one of its pilots tested positive for coronavirus. Local newspaper reports that followed, including this by The Sunday Morning and this by the Colombo Gazette, placed him at an annual cricket match.

Dr. Ashan Pathirana, the registrar at the state-run Health Promotion Bureau, told AFP via Whatsapp Messenger on March 18 that “the individual in the image is not [the pilot who tested positive]”.

The man circled in blue in the misleading photo, Gayan Nagasena, also published a Facebook post on March 17 saying he had been wrongly identified. 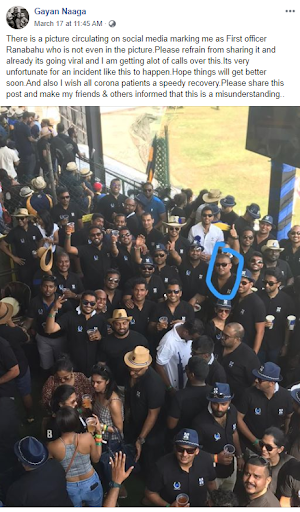 The post reads, in part: “There is a picture circulating on social media marking me as First officer Ranabahu who is not even in the picture. Please refrain from sharing it and already its going viral and I am getting a lot of calls over this.”

During a phone conversation with AFP on March 20, Naaga confirmed he is not a pilot and in fact works as an executive at a Spanish firm operating in Sri Lanka.