Footage of massive crowds rallying in the streets has been viewed more than 1.5 million times in Facebook posts that claim it shows people gathered in the United States to support Pakistan's former prime minister Imran Khan after he was booted from office in April 2022. However, the video was filmed in Senegal two months earlier, when football fans welcomed the national team after they won the Africa Cup of Nations.

"A rally in support of Imran Khan in America," reads an Urdu-language Facebook post shared on April 11.

"America has also come to know that Imran Khan was right." 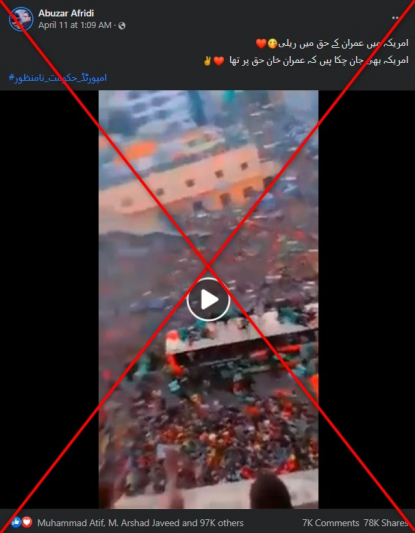 The clip was shared widely on Facebook, including here, here and here, where it racked up a further 530,000 views.

The footage prompted a flurry of comments in support of the ousted leader.

"We love Imran Khan, miss you as prime minister," one person wrote.

While thousands of Khan's supporters genuinely rallied across Pakistan after his removal, the video circulating on Facebook shows football fans celebrating Senegal's victory in the Africa Cup of Nations.

A reverse image search and keyword searches found the video in a tweet from February 8, 2022.

"Did you see all these people today?" reads the tweet in French, alongside a Senegalese flag emoji.

Below is a screenshot comparison of the video shared in the wrong context on Facebook (left) and in a tweet about Senegal (right): 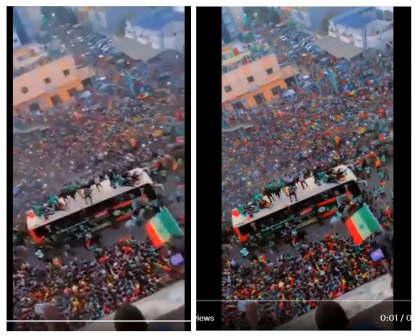 Hundreds of thousands of people thronged the streets of Senegal's capital Dakar to welcome the national football team on February 7, 2022, after the Lions of Teranga won the African Cup of Nations for the first time in history.

The video shared on Twitter resembles AFP footage of celebrations in Dakar on the same day.

The video report was also posted on AFP's Facebook page.

At the 50-second mark of AFP's video, a group of men are seen on the roof of a bus, which corresponds with scenes in the Twitter video.

Below is a screenshot comparison of the Twitter video (left) and AFP's footage (right).

AFP journalists in Dakar said both clips were filmed on a road near the Leopold Sedar Senghor airport in Yoff, in the northern part of the capital, where the team's plane had landed.

Below are screenshot comparisons of the video (left) and Google Street View (right). 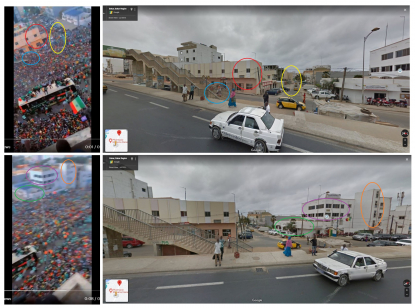