Multiple Facebook posts claiming to show seven men arrested after violence erupted at a burial attended by Kenyan opposition leader Raila Odinga – leading to the destruction of his helicopter – have been shared hundreds of times online along with the names of those pictured. However, the claim is false; while 17 suspects were initially arrested for the trouble at the funeral attended by Odinga, the picture shared on social media dates back to 2019 and shows alleged members of a car theft syndicate. Furthermore, the names of those pictured do not match any of the 17 suspects detained after the funeral violence.

On April 2, 2022, a Facebook post shared an image of seven men handcuffed outside a police station alongside the caption:  “Developing News: Police say the masterminds of the violence that rocked a burial in Eldoret are in custody.”

All seven suspects were named in the post, which has been shared more than 500 times.

The post was published a day after chaotic scenes marred the funeral of Jackson Kibor, a Kenyan businessman-turned-politician. Odinga, a former prime minister, attended the event.

During the violence, Odinga’s chopper was stoned and damaged. The funeral took place in Uasin Gishu County, an area in Kenya’s Rift Valley region perceived to be the political base of the country's deputy president William Ruto – an arch-rival of Odinga in the upcoming elections. 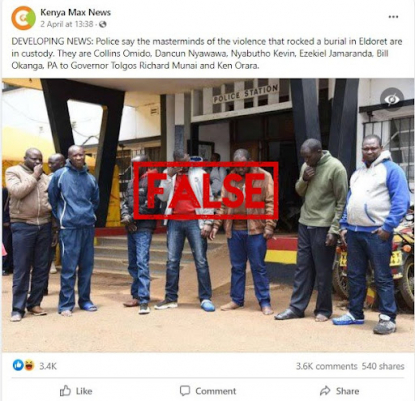 A reverse image search on TinEye reveals the picture is old and unrelated to the claims.

The same image was published in this local news report on October 7, 2019, describing how police had stopped a car theft racket. 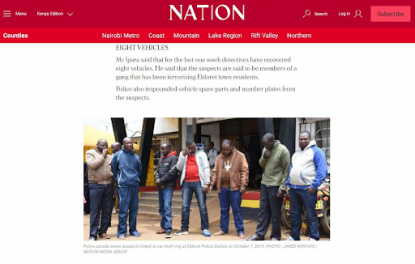 A screenshot of the local news report about arrested suspects linked to a car theft syndicate, taken on April 13, 2022

Following the unrest at the funeral, 17 people – and not seven as claimed in the Facebook post – were arrested and appeared in court (see here and here). On April 13, 2022, 15 of the suspects were released due to lack of evidence while two are set to face trial.

Additionally, none of those initially arrested for damaging Odinga’s helicopter at the funeral have the same names as the seven brought to book in 2019 for allegedly running a car theft ring.

The aggression towards Odinga was sharply criticised by politicians, who called for tolerance as Kenya prepares to hold an election in four months.

An increasing amount of misinformation has spread in Kenya as the general elections draw nearer. AFP Fact Check has debunked claims linked to the polls here, here, and here.