A purported screenshot of a newspaper front page implicating Kenya's deputy president William Ruto in the 2013 death of former cabinet minister Mutula Kilonzo Senior is being shared on Facebook and Twitter. But the newspaper published no such article; AFP Fact Check found that the image was digitally manipulated. There is no evidence that Ruto has been linked to Kilonzo’s death. 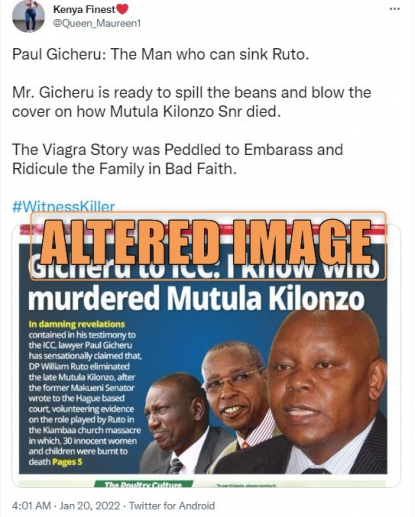 Screenshot of a tweet featuring the doctored image, taken on January 31, 2022

The headline in the image reads: “Gicheru to ICC: I know who murdered Mutula Kilonzo.”

Below the headline is a summary of a purported article claiming that Kenyan lawyer Paul Gicheru told the International Criminal Court (ICC) that Ruto was involved in the murder of Senator Kilonzo.

Kilonzo, a prominent politician and lawyer who served as a cabinet minister, was found dead at his home in Machakos County in 2013. The case has not been solved. In a statement to the senate, Kilonzo’s son said he suspected his father’s death could be connected to the ICC’s investigation into Kenya’s 2007-2008 post-election violence. However, there was no evidence to establish a direct link.

As a senator, Kilonzo was outspoken, especially on his stand that Kenyans who faced charges at the ICC should cooperate with the Hague-based court.

Gicheru at the ICC

ICC prosecutors filed charges against six suspects over alleged involvement in Kenya's 2007-08 post-election violence. All the cases fell through, and none of the suspects were convicted. A case involving Ruto collapsed in 2016, with then-ICC chief prosecutor Fatou Bensouda citing a “relentless” campaign of victim intimidation.

Gicheru, a lawyer, is now facing charges at the ICC for allegedly “corruptly influencing” witnesses in Kenya. He surrendered to the court in November 2020, five years after the arrest warrant against him.

However, there is no evidence that Gicheru has implicated Ruto in the murder of Kilonzo.

A reverse image search of the screenshot leads to several posts including this doctored front page of The Standard newspaper's November 14, 2020 issue.

As evidenced here on the newspaper's official Facebook page, The Standard ran a different front story on the said date.

This claim first surfaced back in November 2020, when Gicheru surrendered to the ICC. At the time, The Standard tweeted a warning to its readers that the purported front page shared on social media was false. 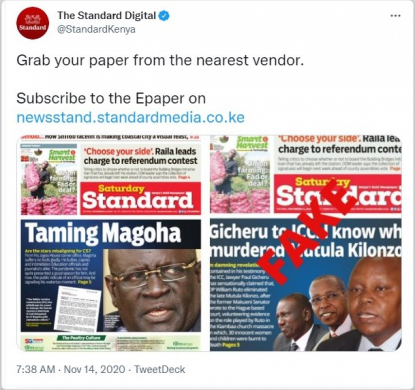 An increasing amount of misinformation has spread in Kenya as the general elections draw nearer. AFP Fact Check has debunked claims linked to the polls here, here, and here. The presidential campaign is widely seen as a two-horse race between Ruto and veteran politician Raila Odinga.