As tropical storm Megi pummelled the Philippines, Facebook posts shared a video claiming the storm was set to worsen and become "twice as strong" as Super Typhoon Rai, which killed more than 400 people in December 2021. However, the claim is false. The Philippine national weather agency said on April 11 that Megi had not become a super typhoon and weakened after making landfall.

"Signal no. 4! It's now a super typhoon! Storm Agaton is now twice as strong as Odette," reads the Tagalog-language title of a YouTube video posted on April 10.

'Agaton' is the local name for tropical storm Megi, which killed at least 58 people after landslides and floods struck the central and southern Philippines on April 10.

'Odette' refers to Super Typhoon Rai, which struck in December 2021, leaving more than 400 people dead and hundreds of thousands homeless.

Signal Number 4 is the second to highest alert that the Philippine weather agency can declare. It is hoisted in the event of "very heavy damage to high-risk structures" and wind speeds of up to 184 kilometers per hour (115 miles per hour). 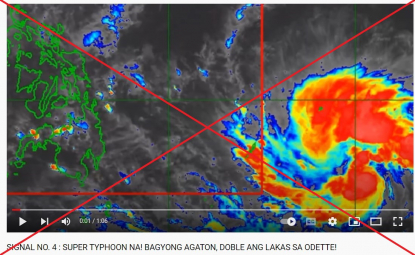 A screenshot of the misleading YouTube video taken on April 12, 2022.

The video was shared widely on Facebook, including here and here, while photos of the video's thumbnail circulated here, here and here.

"Please don't be stronger than Odette, this is scary," one person commented.

"Lord, please protect me, my whole family, my relatives," said another.

However, while Megi caused deadly flooding and landslides, it did not strengthen into a super typhoon more powerful than Rai.

Keyword searches found that audio from the video circulating online was taken from a weather forecast by the national weather agency, the Philippine Atmospheric Geophysical and Astronomical Services Administration (PAGASA) on April 10.

The forecaster called Megi a tropical storm and said it had gusts of up to 95 kilometres per hour (60 mph).

"As of now, we are seeing a low chance of it becoming stronger," he says.

According to the same forecast, PAGASA raised Signal Number 1 and 2 alerts in areas in the central Philippines, not a Signal Number 4 alert as the Facebook posts claim.

In comparison, Rai was classified as a super typhoon and registered gusts of up to 240 kilometres per hour (150 mph).

Contacted by AFP, a PAGASA representative dismissed the Facebook posts as "fake news".

"It has not become a super typhoon," a representative said on April 11.

"We are now seeing that [Megi] will weaken further."

According to a PAGASA update on April 12, Megi had weakened into a low pressure system.

Furthermore, the images in the Facebook video do not show tropical storm Megi.

They were taken from reports about Super Typhoon Rai here and here, Typhoon Surigae that struck in April 2021 and Tropical Storm Khanun that struck in October 2017.

The video also features a photo similar to satellite images in reports about Typhoon Usagi in September 2013 here, here and here.

AFP has previously debunked fake typhoon warnings in the Philippines here and here.