Mutiple Facebook posts in Myanmar are sharing photos of two explosions, which they claim show a "junta attack" on the headquarters of a prominent rebel group in March 2022. While AFP could not verify if such an attack took place, the photos were taken years ago and have circulated in posts and reports about events in other countries.

The post, which shares two photos of an explosion, has been shared more than 100 times. 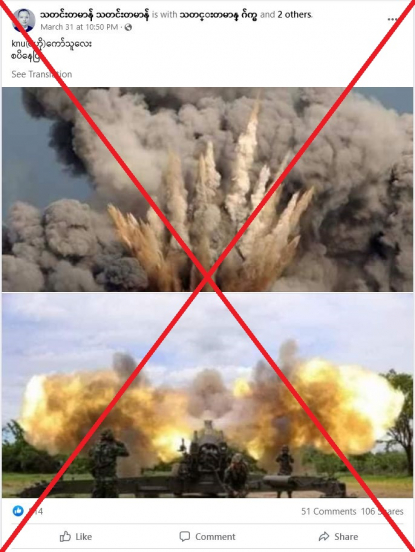 The Karen National Union (KNU) is a prominent ethnic Karen armed group that has fought for self-determination against Myanmar's central government for decades.

Following the military coup in February 2021, KNU fighters have clashed repeatedly with junta troops and offered shelter to those fleeing the bloody crackdown on dissent.

Kawthoolei is the Kayin-language name for a proposed state for Karen, also known as Kayin, people in Myanmar.

Local media reported there were clashes in Kayin state on March 31, 2022, but AFP found no credible reports that the junta attacked the KNU's headquarters.

The photos were shared in similar Facebook posts here, here, and here.

A Google reverse image search of the first photo found it shows an Israeli air strike in Gaza in January 2009.

The photo, which is available in AFP's archives here, was taken on January 3, 2009.

The caption of the photo reads: "A picture taken from the Israeli side of the border with the Gaza Strip shows a bomb dropped by an Israeli air force F-16 jet exploding in Beit Hanoun, north of the Gaza Strip, on January 3, 2009.

"The Israeli military has carried out more than 700 strikes on Gaza since it launched a massive offensive on Hamas a week ago, killing at least 435 Palestinians, the army and medics said today."

Below is a screenshot of the photo on the AFP Forum website: 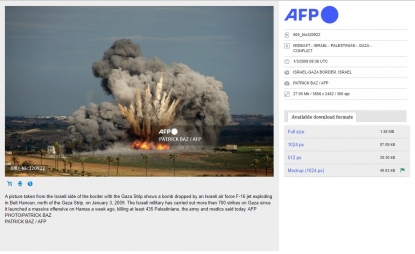 Screenshot of the first photo on the AFP Forum website

Below is a screenshot comparison of the first photo in the misleading post (left) and the AFP photo (right):

The Israeli attack on the Gaza Strip on that day was also reported here and here.

A Google reverse image search found that the second photo has circulated since at least 2016.

The earliest version of the photo was on a Wikimedia Commons page, which said it shows Thai soldiers firing an M198 howitzer artillery piece on July 8, 2016.

Below is a screenshot of the picture on Wikimedia Commons:

Screenshot of the picture on Wikipedia Commons

Below is a screenshot comparison of the second photo in the misleading post (left) and the photo on Wikimedia Commons (right):

A joint military exercise of the Thai and US armies were held from June 27 to July 8, 2016, in Saraburi and Lop Buri provinces, in Thailand, according to reports here and here.

However, the Thai military did not respond to AFP's requests for comment.

The photo was uploaded by a user called "Armyman1989", who posted similar photos of soldiers and military equipment in 2015 and 2016 on Wikimedia Commons here, here and here.

The picture was published in this Thai-language blog post, dated July 25, 2019, about the Thai army's artillery procurement.