Skip to main content
A Ukrainian flag is seen in front of the Opera and Ballet Theatre in the western Ukrainian city of Lviv on March 20, 2022. ( AFP / Yuriy Dyachyshyn)

Multiple social media posts shared online in March 2022 claimed that "only vaccinated Ukrainian citizens" were eligible for an emergency government payment to aid workers impacted by the Russian invasion. This is false; as of April 4, 2022, neither Ukrainian President Volodymyr Zelensky nor the ministry in charge of the scheme has said immunisation for Covid-19 or any other disease is a requirement to receive the benefit.

Text superimposed over an accompanying image appearing to show Ukrainian Prime Minister Denys Shmyhal reads: "No vax. No food ... Ukraine govt announce emergency payments to those impacted by war. But only if you are vax'd. And only through the digital system." 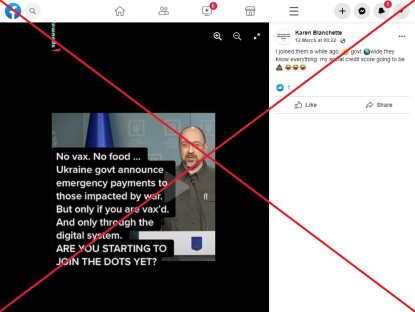 Russia's invasion of Ukraine has displaced an estimated 10 million residents and impacted the country's economy.

On March 3, 2022, Ukraine's President Volodymyr Zelensky announced a relief programme for workers who lost their jobs due to the invasion.

Other instances of the claim appear on Facebook here, here and here.

The image of Shmyhal in the misleading post is a screenshot of his video address on March 6, 2022, where he announced the one-off payment of 6500 hryvnias (US$220) to those affected by the invasion.

The video with English-language simultaneous interpretation was uploaded by state broadcaster UATV English to its official YouTube channel here.

His statement at the two-minute mark translates to English as: "Under this program, every employee, every individual entrepreneur, who lost his job during the war, will receive 6,500 hryvnias.

"The programme will work by analogy with payments with vaccination, that is with the help of the Diia application."

The Diia application is a Ukrainian mobile application that provides residents with access to government services.

As of March 28, 2022, a post on the official Facebook page for the Diia application states 2.7 million Ukrainians have received 6,500 hryvnias (US$220) as part of the scheme.

A review of the Ukrainian version of the video here found Shmyhal said the unemployment relief payment programme would "work in a similar way to the payments for vaccination".

A review of the video found he made no other references to vaccination in his speech.

An earlier announcement about the pay-outs by Zelensky on March 3, 2022 also did not state there were any vaccination requirements for recipients.

"Where the fighting is, every employee, every individual entrepreneur, every citizen of Ukraine, from whom Russia took the opportunity to work, will receive six and a half thousand hryvnias without any conditions," the statement reads.

This Ukrainian government webpage that details how residents can receive the payment also makes no reference to mandatory Covid-19 vaccination for recipients.

Instead, it says people who already collected the jab subsidy are still eligible for the war subsidy.

A search for the scheme on the Ukrainian Parliament's website found Resolution No. 199, published on March 4, 2022. It is signed by Shmyhal.

The text does not mention vaccination. It instead explains the payments will be disbursed via the "ePidtrymka" programme -- which translates as "eSupport".

The ePidtrymka programme was launched on December 19, 2021.

It was created to provide a financial incentive of 1000 hryvnias (US$38) to Ukrainians above the age of 14 who received two doses of Covid-19 vaccination.

The original programme has been suspended under Resolution No. 199, as of April 1, 2022.

A reply by an administrator of the Diia app Facebook page on March 18, 2022 said ePidtrymka was updated for the disbursal of the unemployment benefit during the war: 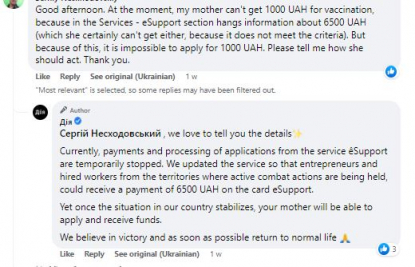