These images were taken in Melilla, and do not show African migrants fleeing Ukraine

Facebook posts published in Ethiopia and Nigeria have claimed that Africans trying to flee the war in Ukraine have been mistreated and racially discriminated against based on images showing black men with visible injuries being held in captivity. There have been widespread reports about the mistreatment of Africans trying to leave the country, but these images were taken at a refugee camp in Melilla, a Spanish enclave on the north coast of Morocco — not in Ukraine.

A post published on Facebook in Ethiopia and shared more than 80 times since March 12, 2022, claims to show evidence of black people being treated poorly in Ukraine

“This world is not made for black people to live comfortably! This is Ukraine. Black people are suffering in this way (sic),” reads the Amharic post’s translated caption. The second shows a crowd of black people sitting on the ground. People wearing yellow reflective jackets are visible in the centre of the picture.

Other posts linking the images to Ukraine were published on Facebook in Kenya, Zambia and South Africa here, here and here.

“This is how blacks are being treated in #Ukraine they being denied access into Poland and proper medication,(sic),” the post shared in Zambia reads.

According to the UN, millions have fled Ukraine while around one million people are internally displaced since Russia invaded the country on February 24, 2022.

Amid the exodus, various reports emerged of discriminatory treatment against Africans trying to get out of Ukraine and across the border. Since then, African countries have been scrambling to help evacuate their citizens stuck in the war-torn region.

However, the claims in these Facebook posts are misleading – the images are unrelated to the war in Ukraine.

The first clue that these images were not taken in Ukraine is the weather. While the temperature in Ukraine is around 2°C at this time of the year, these images seem to have been shot in a warm location as most of the people in it are shirtless and barefoot.

A reverse image search of the photographs shared on Facebook led to an AFP report published on March 4, 2022, by La Voix du Nord, a French regional newspaper.

Both images from the Facebook posts featured in the French article, which discussed the arrival of African migrants at the border with Europe in Melilla, Spain.

Massive crossings of migrants into the autonomous Spanish enclave of Melilla, located on the north coast of Morocco, were reported on March 2, 2022, AFP reported. 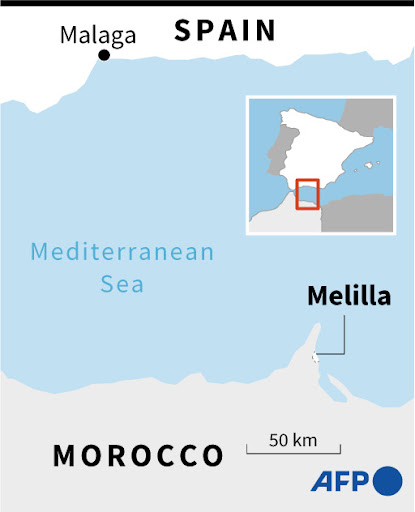 AFP captured a video of the situation at the border between Spain and Morocco. The three men seen in one of the images appear 24 seconds into the video.

The visual details highlighted above suggest the images were captured seconds apart as the man in the middle still holds the same posture.

This led us to find the exact images in AFP's archives, where they have captions indicating that they are video screengrabs from El Faro TV and show injured migrants arriving at the Temporary Center for Immigrants and Asylum Seekers (CETI) in Melilla after jumping the border fence separating the Spanish enclave from Morocco on March 2, 2022. 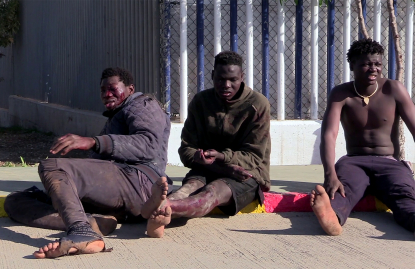 An injured migrant (L) after arriving with others at the Temporary Center for Immigrants and Asylum Seekers (CETI) on March 2, 2022. ( El Faro TV / ) 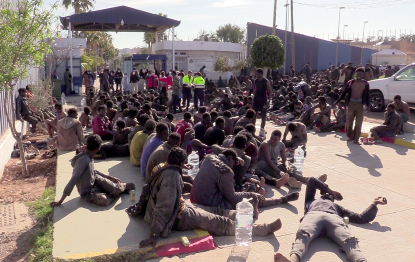 Migrants arriving at the Temporary Center for Immigrants and Asylum Seekers (CETI) in Melilla after jumping the border fence separating Spain's Melilla enclave from Morocco on March 2, 2022. ( El Faro TV / -)

The incident occurred a day after 2,500 migrants made a mass run at the border. Almost 500 managed to cross, in what the Spanish government's local delegation said was "the biggest entry attempt on record".