Social media posts featuring an image of a woman in military uniform claim she is Ukraine's first female fighter pilot and that she died during Russia's invasion. But the Ukrainian Defense Ministry says the photo shows a soldier who won a 2016 beauty contest organized by the military, and the country's first female combat pilot is now a politician. 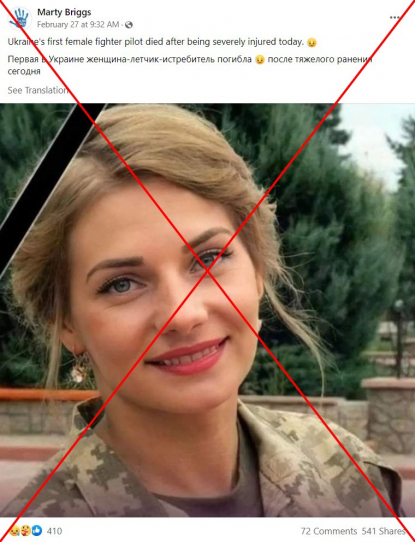 Other examples of the claim -- part of a flood of inaccurate information about the war in Ukraine following Russia's February 24 invasion -- appeared on Facebook here and here, and on Twitter.

A reverse image search showed that the photo appeared in a 2016 article on the Ukrainian Ministry of Defense website that identified the woman as Olesia Vorobei, a soldier, not a combat pilot.

The article's headline says: "A participant of the anti-terrorist operation (ATO), soldier first class Olesia Vorobei, became the winner of the uniformed beauty contest 'Glory to Heroines' of the Lugansk region."

Vorobei did not respond to a request for comment by the time of publication.

Nadiya Savchenko, who is identified as Ukraine's first female combat pilot by the Los Angeles Times, has not been reported killed during the current conflict. Now a politician, Savchenko spent almost two years imprisoned in Russia after being captured by Moscow-backed rebels in eastern Ukraine.

AFP Fact Check has debunked other inaccurate claims about the conflict in Ukraine here.