A photo of Ukrainian President Volodymyr Zelensky wearing military gear has been shared hundreds of times in social media posts alongside a claim that it shows him on the frontline after Russia invaded the neighbouring country in February 2022. However, the claim is false. The picture actually shows Zelensky visiting Ukraine's eastern region in April 2021, nearly a year before the Russian invasion began.

The photo of Ukrainian President Volodymyr Zelensky in a bulletproof vest and surrounded by military vehicles, was posted here on Facebook on February 26, 2022, where it has been shared over 650 times.

The post’s caption states: “The Ukrainian president on the ground. The US offered to evacuate him but he chose to stay I'm Ukraine. This is what real leadership looks like." 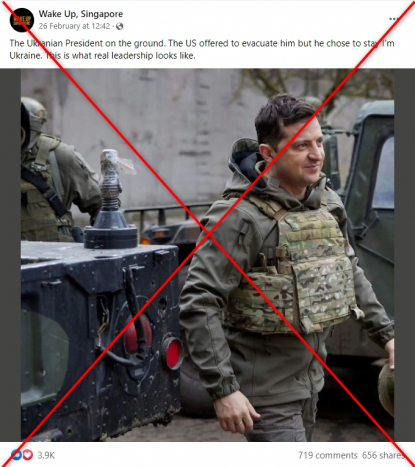 It has been shared more than 150 times after it was posted alongside a similar claim here, here, here and here.

The picture also appeared with claims in Arabic here and Malaysian here and here.

The posts circulated after Russian President Vladimir Putin announced on February 24, 2022, the launch of a military operation in Ukraine, as reported by AFP here.

Zelensky, a former comedian turned president, has been winning fans around the world with his decision to stay with fellow Ukrainians to defend the country.

He reportedly refused Washington's evacuation offer, saying: "The fight is here; I need ammunition, not a ride."

However, the picture has been shared in a false context.

It was published here in AFP's archives. 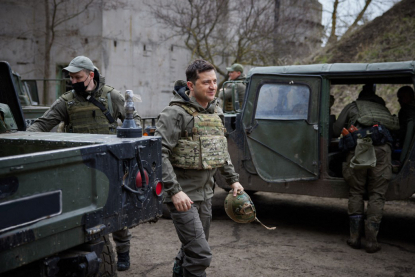 Mariupol is located in the eastern part of Ukraine.

The handout photo was also published in April 2021 reports about the conflict in Ukraine's eastern region here, here and here.

Other photos from Zelensky's visit on April 9, 2021, are also on AFP Forum here.

AFP has debunked a similar claim using other old photos of Zelensky in military clothing here.