As the civilian death toll mounted in Ukraine following Russia's invasion, a video was viewed hundreds of thousands of times in social media posts that claim it shows a Ukrainian reporter inadvertently exposing fake war casualties in a live broadcast. This is false: the video shows a climate change protest in Austria that was staged weeks before Russia invaded Ukraine.

The clip shows a journalist reporting in front of what appears to be rows of body bags.

A person can be seen moving around inside one of the body bags before a woman rushes over to zip the bag back up.

The post's simplified Chinese-language caption translates to English as: "This is a news report by Ukrainian TV about the number of people killed in the Russia-Ukraine conflict.

"In the live broadcast, the "corpse" that was covered with a black cloth and lying on the ground suddenly stretched out his arm and pulled off the black cloth covering his face.

"When a nearby staff member saw this situation, they quickly stepped forward and covered him with the black cloth again." 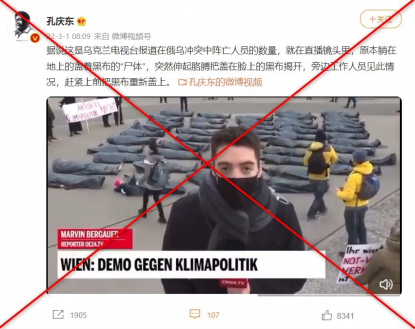 At least 350 civilians including 14 children have so far been killed, Ukrainian authorities say, and hundreds of thousands have fled the country since Russia's invasion began, AFP reported here.

The United States has raised alarm over the "staggering" human cost of the invasion, as the apparent deployment of cluster bombs and other treaty-violating weapons raised fears of a brutal escalation in the week-old conflict.

Footage of the same broadcast was also shared alongside a similar claim here and here on Douyin, the Chinese version of TikTok; and here in a Thai-language Facebook post.

However, the video is unrelated to Russia's invasion of Ukraine.

A reverse image search of video keyframes found the video published here in a report by Austrian media outlet Oe24 on February 4, 2022.

The report states: "Friday (February 4, 2022) will mark 400 days that Austria has no greenhouse gas reduction target.

"The Fridays For Future platform warned that this was deadly, that with every tonne of CO2, the climate crisis is escalating.

"In the afternoon, activists presented 49 "climate body bags" in front of the Federal Chancellery in Vienna."

Below is a screenshot comparison of the video in the false posts (left) and the original report published by Oe24 (right):

A screenshot comparison of the video in the false posts (left) and the original report published by Oe24 (right).

The protest is "solely about the climate crisis," Verena Matlschweiger, a spokesperson for Fridays For Future Austria and co-organiser of the event, told AFP.

"The dead bodies are meant as a symbol, and do not hold an intention to show real corpses," Matlschweiger said.

"During the action by Fridays For Future today, activists lay 'dead' in front of the Chancellery [building]. They symbolise people who will die as a result of the failure of Austrian climate policy," reads the organisation's tweet on February 4.

The protest was reported by the Austria Press Agency and local newspaper Der Standard.