Footage of a man and woman having fake blood applied has been viewed thousands of times in posts claiming it shows Ukraine "faking" civilian casualties following the Russian invasion. In fact, the clip was filmed in 2020 on the set of a series called "Contamin".

"Ukraine faking Russian civilian massacres for pity and more money from international community," reads a post on BitChute from February 28.

The video, viewed more than 11,000 times, shows a man and a woman having fake blood smeared on their faces. 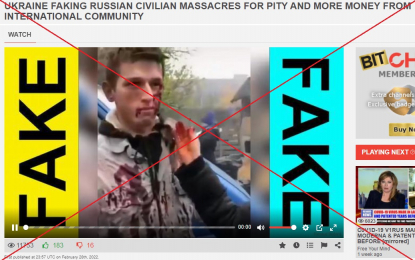 Screenshot of a post sharing the false claim, taken on March 8, 2022

The video was shared in similar posts here, here and here as heavy shelling in Ukraine following Russia's invasion on February 24 killed hundreds of civilians and forced more than 1.5 million people to flee the country.

The clip was also posted by Simeon Boikov, a conspiracy theorist who runs a self-stylised military group called the Australian Cossacks, which aims to "promote pro-Russian sentiment,” he told Australia's national broadcaster ABC.

"How the Media fabricate Fake War News (Propaganda)," reads the title of a YouTube video he posted sharing the footage on February 27, which has since attracted more than 49,000 views.

AFP found the original video after comments from social media users on the misleading posts said it had been posted on TikTok by a Ukraine-based production company called Driu Production.

Driuchenko told people enquiring about the clip in the comments that it was made for a series called "Contamin".

Here is a comparison between the footage shared in misleading posts (left) and in Driuchenko's TikTok post (right). 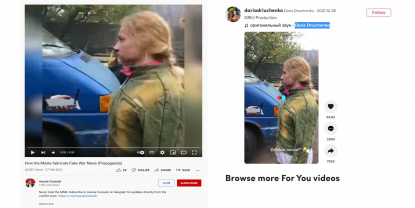 Contacted by AFP, Driuchenko said the video showed behind-the-scenes footage of the making of "Contamin", a series about a pandemic.

"We are filmmakers so we have a lot of 'making-of' videos," she said.

She said the video was filmed in 2020 and sent AFP screenshots of similar clips, where the date saved on her phone is shown as November 14, 2020.

Driuchenko has since removed the video from her TikTok account.

The "Contamin" website says it was created by German-based film producer Harald Franklin.

The woman featured in the TikTok video can be seen in a scene in a video uploaded to Vimeo by Franklin titled "Contamin Reel".

Below is an image comparison showing a screenshot from "Contamin Reel" (left) and the original video uploaded to TikTok (right). 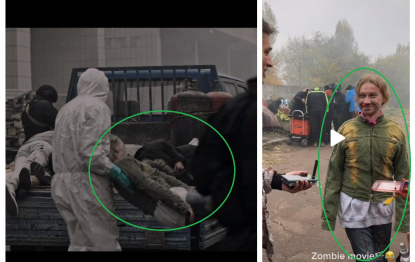 Here is a comparison of the man featured in the video (left) and Driu Production's Instagram post (right).

AFP has debunked a wave of false claims about the Ukraine conflict.