A nighttime video of buildings illuminated by ominous flashes of light has been viewed thousands of times globally on social media alongside a claim it shows Russian forces attacking the Ukrainian city of Mariupol. While the southeastern port city has been under heavy attack, the video was shared in a false context. The footage has circulated online months before the Russian invasion of Ukraine in 2022. The social media user who filmed the clip told AFP it shows a thunderstorm in the Russian town of Volzhsk.

The Urdu-language caption of the footage translates as: "Russia has attacked Ukraine. Blasts are heard in the Ukrainian city of Mariupol." 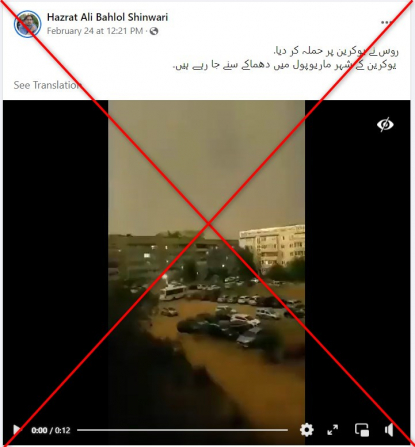 The port city of Mariupol in southeastern Ukraine has been under heavy attack since Russia's invasion, AFP reported.

The video was posted with a similar claim here, here and here on Facebook.

The video was also shared in this Chinese-language post and has circulated in Nigeria, Serbia and Morocco alongside the claim it shows a Russian attack on Ukraine.

However, the video predates Russia's invasion of Ukraine by at least seven months.

Reverse image searches using keyframes found the video is a mirrored version of an earlier clip posted here on TikTok on June 28, 2021.

Below is a screenshot comparison of the video in the false posts (left) and the TikTok clip (right). 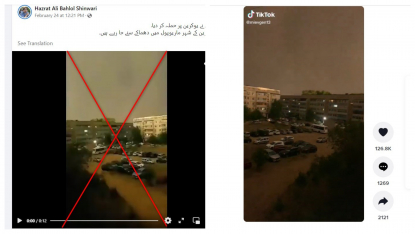 The TikTok user @MiEvgen823 told AFP she filmed the footage in the Russian town of Volzhsk on June 28, 2021.

"This was done in the summer in June, there was a strong thunderstorm and apparently lightning hit the electrical transformer and the lights went out," she said.

The architecture of the buildings shown in the TikTok video corresponds to Google street imagery here of a neighbourhood in Volzhsk.

A check on the weather website Gismeteo shows thunderstorms were forecast in Volzhsk on June 28, 2021.