Social media posts shared hundreds of times show photos of people lobbing Molotov cocktails against a backdrop of flames. They claim the pictures show Ukrainians targeting Russian tanks invading the country. While Ukrainians have been making Molotov cocktails in response to the Russian invasion, the photos were taken as anti-government protests swept the capital Kyiv in 2014.

The post, which has attracted more than 1,400 retweets, shows four photos of people throwing projectiles. 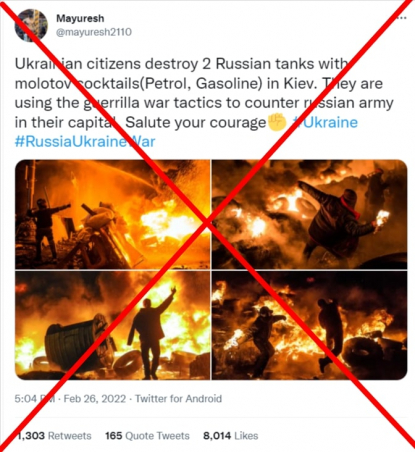 Heavy shelling in Ukrainian cities since Russia invaded on February 24 has killed hundreds of civilians and forced more than 1.5 million people to flee the country.

While some citizens have resorted to making Molotov cocktails in response to the invasion, the photos circulating in the social media posts were taken during protests in 2014.

A reverse image search found the first photo, which shows a man wearing a helmet firing a catapult, posted on photo-sharing site Flickr by Moscow-based photographer and journalist Ilya Varlamov.

The description reads "Kiev street battles" and says the picture was taken on January 23, 2014.

The photo was published in an article by The Conversation on January 29, 2014 about anti-government protests in Kyiv.

Hundreds of thousands of people flocked to Kyiv's Independence Square in winter 2013-14 to protest against Kremlin-backed president Viktor Yanukovych's decision to scrap a key political and trade pact with the European Union.

The three-month protests eventually brought down Yanukovych, but not before a bloody crackdown resulted in scores of deaths.

A reverse image search traced the second photo, which shows a man preparing to throw a Molotov cocktail, to the archives of multimedia company Getty Images.

The description says the photo was taken in Kyiv on January 25, 2014 and shows an anti-government protester during clashes with police on Hrushevskoho Street near Dynamo stadium. 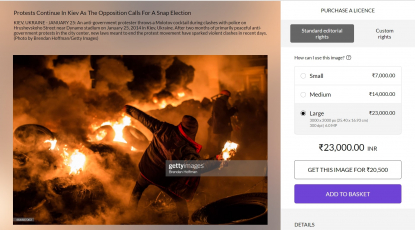 The third picture, which shows a man gesturing in front of burning wreckage, was also taken during the anti-government protests in Ukraine.

A reverse image search found the photo published by European Pressphoto Agency (EPA) and captioned: "A protester gesticulates during clashes with riot police at an anti-government protest in downtown Kiev, Ukraine, 22 January 2014." 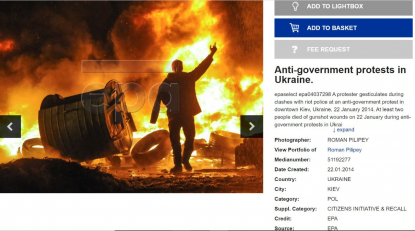 The final image, which shows people throwing petrol bombs towards an unidenitifed target in front of blazing debris, was published by Getty Images in 2014. 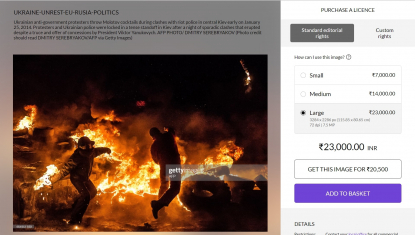 AFP has debunked a wave of false claims circulating after Russia invaded Ukraine.