An image has been shared hundreds of times on social media alongside a claim it shows a genuine news report by US broadcaster CNN about the Russia-Ukraine crisis. In fact, the image has been digitally altered from a 2017 news report about Russian President Vladimir Putin's comments on the US presidential election. A CNN spokesperson told AFP that the social media posts had shared a "fake" report. As of February 23, 2022, AFP found no such reports by the broadcaster or any other credible media outlets.

The image appears to show Putin in an interview with CNN news anchor Kate Bouldan for the US network's "At This Hour" segment.

"Sources: Putin to delay invasion until Biden delivers weapons to Ukraine for Russia to capture," the English chyron in the purported news report reads.

The post's Chinese-language caption translates to English as: "CNN: Putin has delayed the invasion to Ukraine, until Biden delivers enough weapons to Ukraine for Russia to capture later."

The United States and its allies accuse Moscow of preparing to invade the former Soviet republic, which has ambitions of joining Western institutions, including the North Atlantic Treaty Organization (NATO).

Putin recognised the independence of Ukraine's two separatist regions on February 21, despite warnings from the West this could trigger sweeping sanctions, effectively axing the 2015 peace plan to end the war.

In reality, the image has been doctored.

A reverse image search on Google found a CNN news report published on YouTube on March 30, 2017 about Putin denying that Russia had interfered in the US presidential election.

The image in the misleading social media posts has been altered from this report. 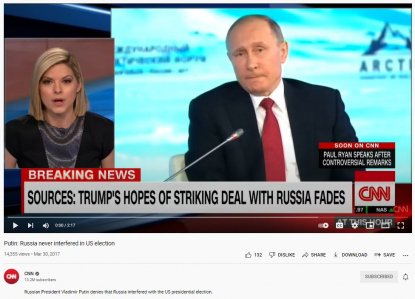 Below is a screenshot comparison of the doctored photo (left) and the screenshot taken from the CNN news report (right):

A screenshot comparison of the doctored photo (left) and the 2017 CNN news report on YouTube (right).

A CNN spokesperson told AFP that the image in the misleading social media posts was "fake".

AFP has found no such reports were published or broadcast by the US media outlet or any other credible media organisations as of February 23, 2022.

CNN has been a frequent target of online disinformation -- as seen in previous AFP Fact Check reports here, here, and here.