This photo shows Glastonbury music festival in 2019, not a protest in Australia

As thousands marched through Australia's capital Canberra to decry Covid-19 vaccine mandates, Facebook post shared a photo purportedly showing huge crowds gathered for the "freedom convoy". They claimed that more than 1.5 million cars showed up for the protest. In reality, the image shows an aerial view of Britain's Glastonbury music festival in 2019. Police estimated up to 10,000 attended the demonstration in Canberra.

"Canberra, Australia. The freedom convoy is much bigger than expected. Over 1.5 million cars were counted at the rally," reads a Facebook post shared on February 14.

Thousands marched through Canberra to decry vaccine mandates on February 12, the latest in a string of rallies against pandemic restrictions around the world.

Police estimated there were up to 10,000 protesters, AFP reported. 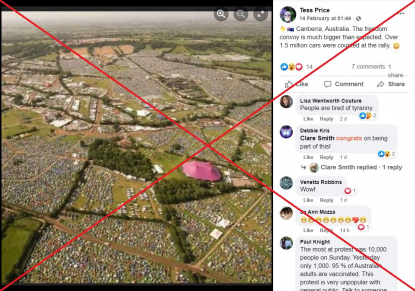 The same photo was shared in similar Facebook posts here, here and here.

However, the photo shows a music festival in Britain, not a protest in Australia.

A reverse image search found the photo in the archives of UK-based news agency PA Media.

The photo caption reads: "An aerial view of the Glastonbury Festival site at Worthy Farm in Somerset". It says the picture was taken on June 27, 2019.

That year, more than 200,000 people thronged the five-day summer festival, which has taken place in Somerset, England since 1970.

Below is a comparison of the photo shared in misleading posts (left) and PA Media's photo (right).

The photo was published in various news reports about the festival here and here.

The landscape shown in the photo corresponds to a Google Maps satellite view of Worthy Farm in Somerset.

Comparison of the photo shared in misleading posts (L) and a Google Maps view of Worthy Farm in Somerset, where the Glastonbury festival is held (R)