Skip to main content
A man wears a mask as he walks past a McDonald's fast food restaurant during the Covid-19 pandemic, in Los Angeles, California, April 6, 2020 ( AFP / Robyn Beck)

Snack wraps are not returning to US McDonald's locations

A post announcing the return of chicken snack wraps to McDonald's restaurants has been shared nearly 90,000 times on Facebook. But the fast-food giant denied the products were returning to its US locations, saying the items were discontinued nationwide in 2020, and that the company currently has no plan to bring them back to the American market.

"Thank god!" says a February 8, 2022 Facebook post featuring a McDonald's advertisement for the Chicken Ranch Snack Wrap with black text that reads: "ARE BACK!!!" across the image. 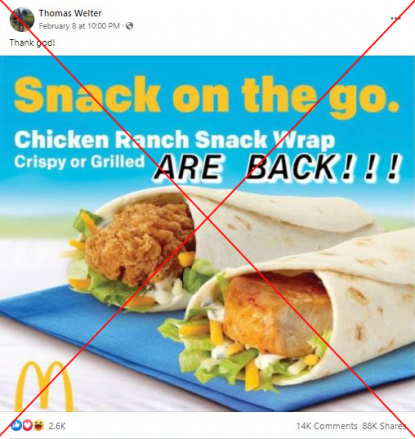 Through a Google Lens search, AFP found that the ad by McDonald's appeared online as far back as 2017. It did not include the text implying a product return initiated by the company. A screenshot taken on February 16, 2022 of a post shared by a McDonald's Facebook page in Kentucky in 2017

"Snack wraps were removed from our national menus in the US several years ago, at which point local markets and restaurants could decide to offer them locally based on customer preferences," McDonald's told AFP on February 15, 2022.

"In June 2020, Snack Wraps were phased out as a local offering. At this time, there are no plans to bring Snack Wraps back to nationwide menus," it added.

The item is currently available in Canada.