A photo has been shared thousands of times in social media posts claiming it shows the last queen consort of Mongolia, Genepil, moments before her execution. Some of the posts also share a portrait photo that they claim is a photo of the queen. The claim is false; the first photo actually shows a scene from the 2000 film "The Last Queen of the King", while archivists and historians said there was no evidence that the other photo showed Genepil.

"The last photo of Genepil, the last Queen of Mongolia, moments before she was executed as part of the Stalinist repressions in 1938," reads a tweet posted on January 28, 2022.

The post shows a black-and-white photo of soldiers pointing their weapons at a woman facing away from them, and another photo of a woman dressed in a lavish cloak and headdress. 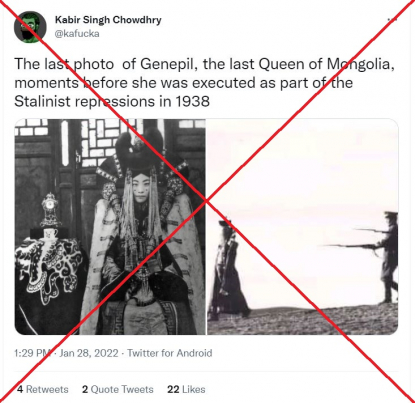 Genepil, born in 1905, was the second wife of Bogd Khan, who ruled Mongolia and proclaimed Mongolian independence from China in 1911.

She was reportedly killed in 1938 during Stalinist repressions in Mongolia from 1937 to 1939.

The photo purportedly showing Genepil's execution has been shared more than 9,500 times after appearing in similar posts on Twitter here and here; on Facebook here; and on Reddit here.

The image was taken from a scene in a Mongolian-language film from 2000, which depicts the death of the queen consort.

The Mongolian-language title of the film translates to English as "The Last Queen of the King".

A description of the movie on a Mongolian film fan site says it is a "historical tragedy about the last emperor of Mongolia and Genepil, the queen of the eighth Jebtsundamba Khutughtu."

The scene showing gunmen walking behind the woman can be seen at the 1:55:10 mark of the film uploaded here to Facebook.

Below is a screenshot comparison of the photo in the misleading post (left) and a still from the film uploaded to Facebook (right).

Moreover, there is no evidence that the woman wearing a cloak and headdress in the second photo circulating in posts shows Genepil.

A reverse image search, followed by keyword searches, found the picture published in Volume 39 of National Geographic Magazine in 1921.

The image's caption reads: "A Mongolian lady sits for her portrait before a Chinese photographer". The photo credit reads: "Photograph from Luther Anderson," an American journalist.

Rebecca Dupont of National Geographic's archives department told AFP that the original print for the picture shows a similar description: "Photo. from Luther Anderson" and "Mongol lady in holiday costume. Photograph by a Chinese photographer at Urga" — the former name of Mongolia's capital Ulaanbaatar.

The description did not mention Queen Genepil. 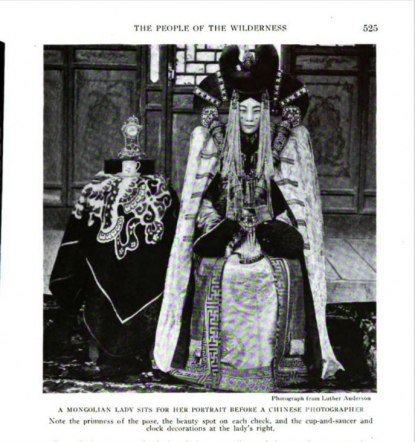 Screenshot of the photo in the National Geographic Magazine

Professor Christopher Atwood, from the Department of East Asian Languages and Civilizations at the University of Pennsylvania, told AFP that it was unlikely that Genepil would have worn the a headdress with "horns", as seen in the image.

"[Since] the Bogd was a lama (high cleric) he could have a consort, but he couldn’t legally marry. Thus his consort could not wear the 'horns' worn by married ladies in pre-revolutionary Mongolia," said Atwood, author of Encyclopedia of Mongolia and the Mongol Empire.

Similarly, Yingbai Fu, a PhD student in history of art and archaeology at the SOAS University of London, said there was no evidence to suggest Genepil was the woman in the photo.

"I have not found any photos of Genepil from a credible source," she said.